An ex-employee of ours has just got a new job.
It’s been almost 2 years since we parted ways and I think of him as a dear friend.
One of the 2 best model coordinators we ever had, he now calls himself a FIM, for Fabrication Information Manager.
McIntosh Timber Laminates, the company he joined, I came across about a decade ago (they have been around for much longer) – suppliers of glulam beams to NZ and the world.
A couple of years later (2005 is my guess) I went to a presentation that I found interesting, somewhat bizarre.
It was about the Fale Pasifica (see link) and the project was explained by 3 parties involved, the architect, the structural engineers’ team and the representative of the manufacturer of the main structure.
It was fascinating and almost unbelievable to see how this building was designed and documented using 2D technology, to then have the Fabricator really roll-up-their sleeves and model-it-all, so their risks were addressed and spatial-accuracy and coordination achieved.
People involved within the design process may argue with me the opposite, it is likely that the team had used 3D(+) software help here and there, I base my comments on that presentation, where Ivan Mercep and the engineers left me wonder why so back-to-front their approach had been.
Good luck with your new job RDJ! 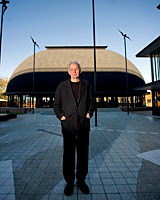 (Ivan Mercep outside the Fale Pasifika he designed for the UA – photo Dean Purcell)
http://www.mcintosh.co.nz/CASE+STUDIES/Fale+Pasifika.html
Posted by Zolna Murray at 7:31 AM