Sorry Graphisoft, I can’t get enthusiastic about your new stair tool.
Not just because Andrew Watson (from a place even less known than Palmerston North, NZ – and that means a truly tiny dot on the map of NZ) has created a pretty serviceable stair tool some 15+ years ago and Cadimage had spent over a decade in promoting it and selling it to the ArchiCAD-users’ world, but because, while the stakes are so high in the industry of what way (if any) it should be heading to get out of the dark ages, you could/should be doing some really groovy stuff in showing the way.
Yet, you launch a ‘stair tool’.
I mean, really?
How about a pen -colour manager or layer selector or text aligning tool?
I said it before, and not just once: repackage your product, call it an ‘all encompassing, constructing BIM tool’ and you’ll do more good to the industry than any type of new tool development.
Get out of this comfort zone of “we are the architects’ tool’’ and the ‘designed by architects for architects’, once maybe cool but now extremely dated mantra, and attack the industry head on.
Show us, your party faithful that have stuck with you for 1, 2 even 3 decades, that you still know how to spin the wheels in the industry and will not be relegated to the lower ranks of solution-providers that craft entire road shows around pitiful improvements on previous releases.
Show us, and the world what you truly are made from!

I know, you do not listen to me, you have never, not over the years.
I know, you do not care about the personal investment of many (like me) that mastered your tools to exceptional levels at high personal price.
You may care a bit (but probably not enough) about the investment companies made into purchasing your tools and shaping their own workflows around it over year (if not decades).
But you should care about the future of your own product as its development, marketing and generally placing on the market is seriously getting off the track, even in ‘safe’ countries like your (and my) ‘own Hungary.

My dear, beloved, ArchiCAD and Graphisoft. Please wake up!
Promoting a stair as the central innovation for this year, really? 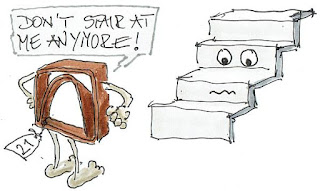 The biggest secret, those with vested interest in BIM do not want you to know!

If you are, or have been involved with BIM in any sort of form, move past the cheesy headline of this post and think: are you truly confident that this ‘BIM’ thing is working?

That an approach that arguably has been in existence for 3 or thereabouts decades, had everything going for it in the way of technological developments (hardware, software) and is serving one of the biggest global industries – made almost no impact on the world-and its targeted industry in real (and even less positive) sense.

Sure, people involved in it (including myself) are able to rattle lists of areas where BIM ‘is useful’, ‘may save money…xxxx % or more’, ‘raise productivity’ or ‘help achieve targets’, but these claims are often fuzzy and unsubstantiated and never scientifically quantifiable.
After all, there almost never are two projects available with exactly the same set of base conditions, done in parallel, one with and one without BIM.
And even if there were, who is to say that the personnel of one would not make one work (there are still plenty on non-BIM projects that perform well) or the other fail, for a successful and valid appraisal of the entire approach.

There are many BIM professionals, that have managed to squeeze out a career of BIM, spanning 1-2+ decades and had done well from partaking in never-ending travelling circuses called ‘BIM conferences’. Most have instinctively learned, to fine tune their stories that accompany the same set of 3D slides of pipes, columns and complex staircases, to the ultimate BIM truth, they themselves have figured out: they’d done everything they could, but the industry is ‘just reluctant to change’.

But, that is an easy way out, both for the said practitioners and the industry.
Surely, there is more to it, than ‘just’ accepting that an industry that employs zillions is purely made up of the type of people, that cannot recognize, what is good for them and ‘do as they are told’.

So, here is the secret, I was referring in the headline:
BIM is not working, because, it is a fundamentally an approach designed and built for a ‘collective psyche’ while the industry on all levels (from very small, to very large) works mostly on the success and even more, failure of the ‘individual’.
In an environment where the existence of the individual is constantly threatened, the individual’s focus is on survival as opposed to investing in skills and efforts for a ‘better (BIM) world’.
Sure, some people will train in BIM to enhance their chances of employability, but ‘one Revit modeler will not make global BIM’ not even a hundred thousand of them.
A company, similarly may write an elaborate BIMmisation Plan to enhance its market presence, but all of that is just window dressing, when it comes to true BIM empowerment of the industry.

If one carefully examines the fundamentals of the approach as presented by ‘leading BIM practitioners’ to identify the reasons for its failures, one must wonder if this is some sort of a bizarre, left over virus, that escaped from the dying communist era and is relentlessly sharing the mantra of ‘play together nicely’.
Even more bizarre is that they are targeting the global industry that is probably up there with international politics on its inability to ‘play nicely’, at any level.

So, let me say it simply: BIM does not work, cannot work, unless every part of the organism it is applied to practices it in full. Meaning: buys into the philosophy of it and works it ‘hands-on’.
Let me not elaborate on the exact level of ‘hands-on’-ness here, as there obviously are different levels allowed for different parts of the ‘organism’ but it is important to note as illustration the cliché, that the ‘chain is only as strong as its weakest link’ - or the one that refers to absoluteness as ‘one cannot be partially pregnant’.

There cannot be functional BIM projects with partial uptake – no matter whether they are single houses or international airports. Similarly, companies cannot claim BIM success, with uptake of less than close to a 100%, again, regardless of the scale, a 2-3 people boutique architectural studio or an AECOM-type giant, spanning the globe.

If this claim of mine does not ring true for you, then maybe ‘you’ are better informed than me and have seen ‘real’ improvements in the industry from partial BIM dissemination here-and-there, through selected trainings, single-digit software purchases, pilot projects and government-mandated showcases – or maybe are just blinded by own vested interests in the above trainings, software development etc. etc and unable to see the truth.

Hoping and promoting that ‘gradual’ improvement will lead to high levels of uptake from the above named endeavors, is also false if not straight misleading to those less informed on the topic. If a company of 200 trains 5 people in any BIM software, than the company gets just that, 5 people that had done a training (not even sure that those will grow into anything BIMishly useful).

If an airport project, that employs thousands mandates an ‘evolving BIM modelling approach’ that is created and truly accessible by a small ‘BIM group’ (and often totally out of whack with the rest of the project), than the project is getting exactly that: a handful of people with some modelling skills playing forever catchup within a real project.

In reality, nothing wrong with either as long as everyone knows what they are getting for what.

Let me close on a positive note: I am a BIM believer, have been for 3 decades and I believe that where close to 100% uptake is achieved, its success is inevitable. Nothing less, nothing more. 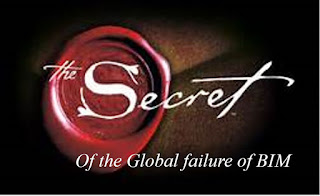