Let’s be pedantic: Calling it ‘2D design’ is insulting!

There is a new tide of BIM promoters roaming the AEC.
With cocky attitude and high level of confidence they promote various forms of ‘Conveyor belt BIMs’, full of digi-jargon and flow charts.
Everything they offer seems to be ‘leading’, ‘state-of-the-art’ or at least ‘best practice’.
I would give them points for their enthusiasm and self-assurance were they not so far-off what happens in the real world.
Something specially bothers me in what they are doing to AEC:
They constantly refer to ‘2D design’.
I’ve seen charts having ‘2D design’ boxes for architects, structural and MEP engineers. I’ve also read workflow described as: ‘the model will be developed based on the consultants’ 2D design...’
Building elements are never 2D, they all have spatial characteristics (even signs, pipes, wires or ‘spot’ objects, like light-fittings).
Outputs may be 2D and should be referred to as ‘design documented using 2D projections’ (or similar).
Nowadays 2D drawings can come from hybrid models, real models or dressed up ones and should not label the ‘traditional’ documenters as 2D designers either. Guilty by choice of the tool?
Just because someone is not ‘publishing’ their designs through digital 3D models does not mean they are not designing in 3D+.
Does that mean designs that are fully resolved in one’s head (see Tesla’s quote in previous post) should be considered 0D (zero-dimensional) designs? 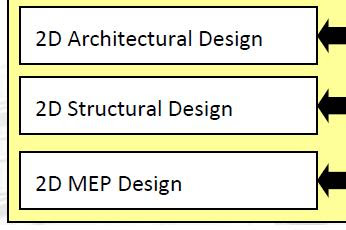