Control is a bad word...

...Should not be associated with BIM - a reader argues my definition of the maxCME from yesterday.
It makes me think of The Fat Controller;
Remember The Fat Controller? In our old office, we had a picture of him on the wall.
I modelled the role of the BIM controller on him, aligned our company colours with the yellow west, though thankfully stopped short of making my guys wear top hats.
A cheerful chap, that I also associate with Ringo Starr, The Beatles drummer.
He voiced the first two series of the children's television series Thomas the Tank Engine & Friends.
Starred in many movies too, but let’s not digress too much.
Due to Ringo’s influence or just endless repeats of the tapes, I have such confidence in The Fat Controller and his team, that I would happily put my BIM data in their custodianship to control.
I guess, Caretaker or Custodian would be titles agreeable to most critics of the BIM controller, minus the ‘control’ of course.
For me? Too PC, or at least too passive to reflect the role that needs to lead, guide as well as manage, set the rules of the game and carry the responsibility to shape project success.
This is a critical role within the process, I’ll keep pondering about what to call it.
How about: BIM Data Moderator? 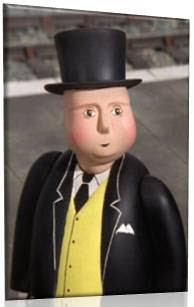