BIM is about certainty...

...I utter this daily, often more than once to anyone caring to listen and those that don’t, but are still forced to.
So, one would think of me as well versed in certainty.
Interesting then, how much I freaked out when Graham (husband) was interviewed on AD Classic FM this week and broadcast predicting the moon to act in a certain way – 24hrs after the interview.
He talked beautifully, no ‘ohm’ or ‘ums’, only one ‘you know’. Did not get off the subject much, the interviewer kept him on the topic. Nothing to worry then...
I was paralysed with fear between the first airing of the clip and the moon finally eclipsing itself almost 30 hrs later.
Graham was ecstatic, driving around the town through the night to get the best shot of the phenomenon.
Afterwards, I was relieved. It happened, just as he (and admittedly many others) predicted.
Once I thawed enough, I could think of the experience a bit more rationally and look inwards for clues.
Have I been so damaged by the industry I work in, where things so regularly go wrong, that I no longer am able to look forward to little celestial celebrations without fear?
What did I think could happen?
Moon decide not to rise? Earth refuse to cast a shadow? Sun become all contractual?
Their budget blown over? 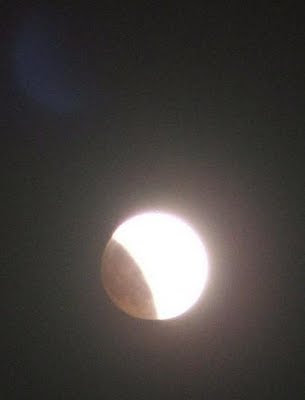