The need to have universal standards for working in BIM has been identified long time ago.
Not having one has a detrimental effect on BIM’s ability to mature.
The buildingSMART alliance claims to have developed the ‘basis for true information interoperability with AEC’.
I am unconvinced.
It smells of arrogance to claim the right to force an entire industry to align with the rules that themselves are yet to be proven.
If a new way of transport emerged suddenly, and we needed to change from an established system of driving, it would became warranted that new ‘standards’ are devised. But, how would that happen?
1/ The major players (commercial entities, monopolies or cartels) would set the new standards
2/ A not-for-profit entity that represents all users would set the new standards
3/ Neither – the new standards would evolve on trial/error basis – hopefully with few casualties on the way.
Curiously, I am not set on an answer myself.
I do believe that, the way-of-work in BIM has to be in synch with the way-of-life of people involved, i.e. the tools of communication should be similar  (language, grammar, habits and routines);
Paradox:
In the past, all architects could produce drawings but most had to have their letters typed up–
Nowadays,
In many offices, architects write their letters themselves but no longer are able to produce ‘official’ drawings!
Illustrations drawn by my daughter Barbara’s friend Rose;
Included as a preamble to my future SIMS  related postings; (2 pictures out of 3 in a series) 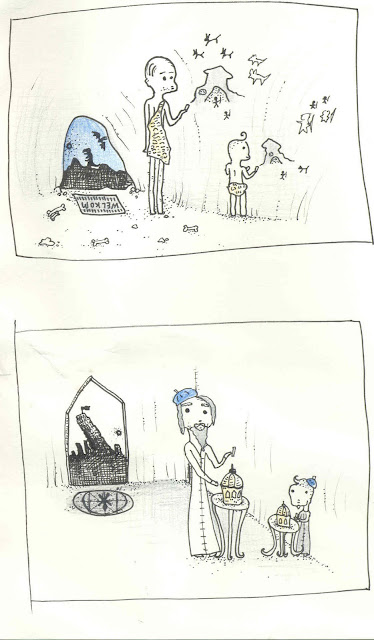