Biased and proud of it

92% into fulfilling my pledge to produce a BIM-blog-post-a-day for a year, the “results” are interesting:
The post that received by far* the most hits has been the one where I declared my deep devotion to the ‘Archicad Marquee’.
One can argue, that I promoted the blog heavily on Archicad based forums, I claim to have been even handed on self-promotion from the very start of blogging, if the scales tipped to favour one over the other, that was not of my making (or intentional, anyway).
Somehow I stumbled on something quite critical. Something that first occurred to me more than a dozen years ago when I still drove AutoCAD as a pro too: Archicad was made for the thinkers and doers, the hands-on solution makers.
I use some other smart packages daily, DE, Tekla and even Revit (yes!) ‘blow my socks off’ regularly with unexpected (or previously unknown to me) abilities.
I may be prejudiced but I do usually give credit where it is due.
When I’m charged with making decisions about a project I consider all relevant factors, and based on the particular circumstances Archicad may not get shortlisted at all.
Still, when I put on the hat of the ‘virtual design manager/construction coordinator’, I go for Archicad.
Multi directional section lines and/or clipping-planes just won’t do, if you’ve ever known the Marquee. 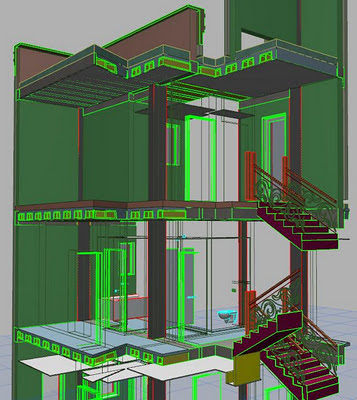 * ratio of post ‘popularity’: about 3 to 1 for the Marquee compared to the second in place
Posted by Zolna Murray at 7:08 AM