What a pathetic little story this one turned out to be…

A real,’ first world white girl drama’, one might say – though involving a family of 4.
New Zealanders, decent citizens stranded on the 32nd floor of an apartment building in Hong Kong. Barricaded behind dozens of unopened boxes of mostly valueless household items, locked in a 2 year rent contract, 2 teenagers in private schools, yet no job, no income.
Really sad, pass me the tissue box.
Still, no news in this for the rest of the world apart from the 4 pathetic creatures scratching their heads and thinking if there possibly could be a dignified way out.

For the mother (me) there are plenty of jobs to rescue around the Globe (she has got some secret powers, you see) – and desperate AEC clients wanting to be served, but she can’t move as she’s been scammed.
She’s been trying to get the media’s attention to this little scam, for numerous reasons, yes, to name and shame those at the centre of it but also to give her and the family some closure to move on.
Oh, yes, and to warn others not to become victims of this scam.
No media is interested in the story, no local journos (Hong Kong) no New Zealanders (where they are from) or from any other country, from where future victims might come from are interested in mentioning or God’forbid investigate the story.

It would be of interest if the perpetrators were, say pretend Nigerian Kings, or Russian mafia or some other lowlife trying to get the better out of a somewhat naïve, very trusting, white (middle class) New Zealand family.
The problem is, that the scammers here are well respected – internationally active, multi-national companies.
Starting from Gammon Construction and backed by its two parent companies Jardines and Balfour Beatty.

Sorry, too hot. Will not touch.  Tough luck.
The Embassy will provide a list of lawyers, Gammon would ship us out but provide no compensation or admit any wrong doing, Balfour Beatty will wash its hands that there is anything unethical happening here and Jardines?
Well, Jardines will have a great time making fun out of the victims (see attached); 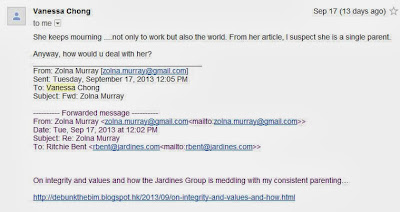 I’m no victim by nature, so will resist becoming one this time too, but I am so convinced of the wrong doing of Gammon here and the media actively protecting them and their parent companies, that I will make the unsavoury move to get into a Hunger Strike from tomorrow morning (8am HK time);
The following Press Release explains it all:
http://gammonandfriends.blogspot.hk/2013/09/press-release-hunger-strike-and.html

And yes, it is all a bit pathetic to my liking, but spare a thought for the fact that these companies do operate in 80+ countries, extremely likely that yours is one of them.
So, if this little press release does not appear in your local papers, they are covering up for them, there too.
So, if you like to do your little bit for some decency in the Global AEC maybe share this link;
If you don’t well, probably will not make any difference to anything, anyway.