The writing is on the road...

My husband believes, I write sentences that are far too long and use punctuation the Hungarian way, not well for clarifying meaning.
Thankfully no longer the sensitive type I accept his criticism gracefully, promising to try harder, while I secretly collect samples of English road-signs where a comma would make a hell-of a difference;
If commas were used on road-signs.
Two great examples from my collection are “slow children playing” and “reduce speed bumps”.
Writing on the road to instruct or warn is another interesting form of communicating with the users of the infrastructural-piece in question.
While living and driving in NZ, I was often amused when multi-worded instructions (like: slow down school) were written out in such sequence that the driver was supposed to read them from the bottom-up while for me a much more obvious way would have been the ‘normal’ way.
“Way give stop” stuck with me forever. Maybe I was doing my ‘big-picture’ thing and not paying attention to detail, at least not in the order they’d predicted I would.
(or envisaged that I should)
My interest in ‘verbose traffic-signs’ has also been related to my work, the way words have been added sometimes haphazardly I believe has lessened their use, similarly to the way technical documentation in the AEC has been moving away from graphics over the last 2 decades. 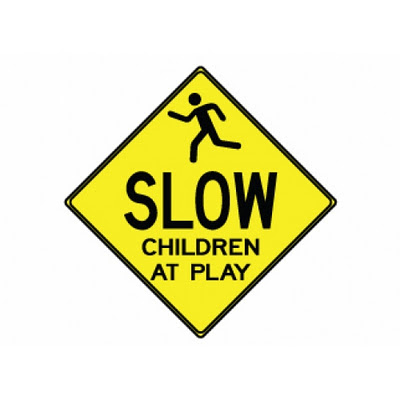