A Mexican on a bike and the squashed car syndrome...

A lunar eclipse is coming in early December and husband is looking forward to it.
Any such event gets his enthusiasm for illustrating planetary-arrangements going and I see him sketching a ‘Mexican on a bike’ to explain a particular phenomenon for the children in his class.
I model one too (just for fun, screenshot attached) while in parallel I think of another syndrome that has been troubling me lately: I call it the ‘squashed car approach’.
It describes a system of documenting a horizontal cut-through of a building in an orthogonal projection without separating logical-levels out.
Take a storey within a high-rise for example, Ground floor plus mezzanine with various other (minor) level-changes in between and show everything on one floor plan.
If you strictly follow ‘traditional’ 2D orthogonal projection rules and cut your space at 1m, showing what you see below and dotting what’s above, you’ll be getting close to the ‘squashed car image’.
Even under Flatcad’s regime the conditions existed for easy creation of ‘exploded’ floor plans, where more than one horizontal cut could be taken over a multi-floored – multi-height space.
Model based documenting is even better in handling this situation, not just by modelling the space digitally but also providing the tools to slice it up in such ways that the information users are not facing the mangled-up wreckage of a squashed-floor. 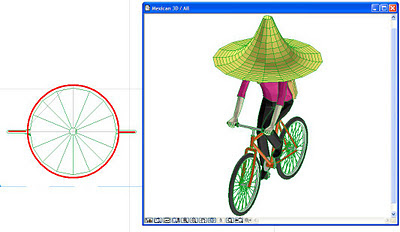