It’s been a while since I called to arms on any particular topic or posted a summons, invitation, or appeal to undertake a particular course of action on anything, having spent the last year or so in a bit of a BIM-reflecting and re-calibrating state.

I am using this opportunity to soft launch an idea that will be aggressively promoted in the future, for those that are interested to get onto it early to have the opportunity to do so.
The details (or as much as I wish to share at this point) are included in a slide show:
http://www.slideshare.net/zolnamurray/project-tpo-2 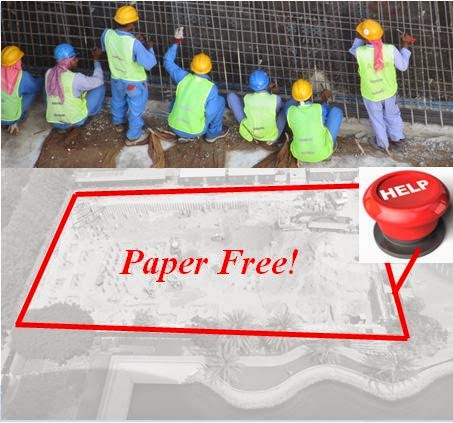 Posted by Zolna Murray at 8:26 AM 8 comments: Links to this post

A couple of days ago, I was sitting in a pretty ordinary design meeting at my pretty ordinary (non BIM)  job where the main topic was slagging off the non-present architect of the project by the lead (specialist) designer.
I knew better than try to counter the clever jokes of ‘what architects are good for...’  and did not visibly flinch at the comment of ‘we let them design the colour of the toilets…’ Still the little interlude had me think about how seriously the industry misunderstands the role/job/responsibility of the ‘real’ architect. Followed by the thought that ‘real’ architects do rarely exist anymore, so the question is irrelevant any more… and what an earth was I thinking when I chose that as my profession some 30 years ago.
Even worse, why did I strive to become good at it in the true meaning of the term and pursue that idea for decades through thick and thin… mostly the latter.
Now, add to this of almost the same length of time of investing in becoming a good BIMmer (an architect with a more contemporary toolset) and I do have to wonder – will I ever learn?
So, with these sorts of things occupying my mind – it was a nice coincidence to be approached by a friend with a suggestion for a blogpost.
Djordje writes about a particular event that I was also a guest of, but also tackles the bigger picture of the lost (idealised) role of the architect and their future if there is still such a thing for them. (us?)
All that within a context of a pretty exclusive BIM gathering that had despite of being cool and fancy managed to avoid the real questions, but delivered at least one snazzy speaker that I enjoyed too.

The importance of Johnny

Almost six months ago, I have had the pleasure of attending a by invitation only conference organized by the makers of my professional software of choice. I will be conceited enough not to mention the company or the software, as I do think that most of the BIMsphere would know which ones am I talking about. Those that don't, can skip the rest.

This conference was important to me on a few levels. I got to go to a place that I love, but have not been to in nine years. I was to meet a lot of people that I have worked, fought, cooperated and became friends with, sharing a common passion. Even better, I was to meet in person quite a few people with whom I worked, became friends, and knew virtually for quite a few years, some of them even a decade or more! And, looking through the list of the speakers, there were quite a few great topics, and quite a few speakers that I really wanted to see and hear.

So, the day came … I have landed before dawn on the day of the conference registration, spent the day just breathing in the city and the weather, and kept bumping into people that I knew, and “knew”. The better part of the afternoon was spent in “oh, I know you!” moments after reading the name tags. And the cakes, of course …

Others have described the conference in more detail, and yes, it was everything I have thought it would be, except next time I will get a cheaper accommodation … and those three days went past quickly. The air was heavy with the passion for the product, the solutions and their implementation, that ranged from single homes to city districts. Everyone was playing the same song, in their own way – these tools enable us to do better.

The reason why I am writing this is the only guy that came from reality. Not from, arguably the best, solution nirvana. Johnny the Emperor. An American architect, award winning, incredible salesman, even more incredible presenter, classic car collector, that does not practice architecture, and did not mention the product, or the solutions, once. Wait, what? What he DID do is bring the reality crashing in. With the thumb and index fingers of his right hand an inch apart, and the left hand stretched as far as possible, he illustrated what is the part of the cake that the architects get (the right hand) and what is the rest. And he does it all – develops properties that he designs and builds, and then sells or rents. Or lives in.

That gentleman is an architect in the true meaning of the word. He contemplates, and does the building. He is not letting the flotsam of the construction industry eat away the fruits of his labour. He does what an architect should do: imagines a building and creates it. And then parks his collection of Porsche 356s in the ground floor – sorry, first floor, we are in the US of A. Not that we have heard what happened between the Rambler with the UHaul trailer and the 356s, but that's probably a topic for another occasion.

Most of the attendees asked themselves why did he come at all. Self promotion? To spread professional insults? To degrade the holy profession that allows us to float by the powers of our imagination and create the built environment? Some were even offended. Frankly, I asked myself at the first moment some of these questions, and discussed it with the people sitting around me. While he did stick out of the prevailing software solution nirvana, like a proverbial sore thumb, his hand gesture illustration was the illustration of the reality, and the truth. It probably helped that for the most, if not all of my professional life I have worked in the design and build environment, and have actually never practised “pure” architecture. You know the kind, when your responsibilities stop after the design is approved and the contractor comes in.

As does your income, while others', at a magnitude of order larger, is just starting to flow.

So, did Johnny the Emperor – as he has said his family and his team call him – come to the conference as a showman, or an example of something that an architect should not be, or as an example of what an architect should be? As the time passes, I do believe that the latter is the case. He did bring in a dose of reality, hardcore profit making attitude, while never actually straying from the path of architecture and the solutions that his team uses to create it. You don't have to mention it or sing praises. You don't even have to be liked by the audience. You only have to tell what you are there to tell: that architects should finally take their destiny in their own hands, and yes, there are those wonderful tools and solutions that have been around for three decades and still people hear about them for the first time, and that the cake is very, very large. He does not want to pick the crumbles off the plate, he eats the cake.

As should we all.

If nothing else, that was the reason he should have been where he has been, and the lesson we should have learned.

Posted by Zolna Murray at 11:48 PM 8 comments: Links to this post