Tony Mendez: Who's the target audience?
John Chambers: People with eyes
(from Argo)


You can safely deduct, I’m really into mainstream movies these days;
And whatever I watch, I see BIM in it.


The above described type of ‘target audience’ may have been subconsciously on the minds of those that organised the BIM lecture (forum, pardon me) I went to yesterday.


The format, the topics, the seating were all designed to restrain even the least enthusiastic BIM supporter long enough, to make them champion the dogma.


To be fair, even though they cast their nets widely, they would not have expected the target audience to hate it;
I was not even invited originally, so have little right to complain about not learning anything new, again.
Closer to the truth, I did learn something, quite interesting:


Airports are nowadays measured in annual people-throughput and the amount of steel they include within;
(the buildings, not the people, I suspect – though estimating the steel content of the passengers could be quite fun, too);


I saw Phil from Causeway, in the break.
He is high on my list of respected acquaintances:
1/ he was gentlemanly enough to invite me to join the BIM panel sponsored by his company recently even though he probably suspected I’d say things his other guests would not like…
2/ he fronts a company in the ME that has at least 3 highly clued-up people in its management that I personally had met (very unusual )
3/ he can sell ‘CAD measure’ – and has sold hundreds of licences to my company!


Now, that’s a cunning achievement, for more than one reason!


I was about to tell him, that I intended to blog about Tim’s extremely useful parallel that he shared with me at the previously mentioned event (link below),
one befitting the institution we were standing in, as soon as I worked out how to include the word ‘sex’ into my blog and still keep it G rated,
when the break was broken. 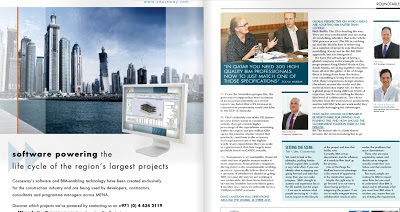 Now, if you think it is plain hypocritical to consider myself to be an ‘indie-BIMdie’, yet widely use product placement within this blog – remember, I’ve been getting my clues from mainstream Hollywood.