BIM @ universities (the previously promised follow-up to the Causeway post)

Last Thursday I got invited to a black tie event – (Construction Week Awards)
I guess this is the closest I'll ever get to a Hollywood type of award-show, must make the most of a good dress-up opportunity;

Correspondingly, I urgently need to ‘tie’ up some loose ends here, and do it well before the night,
in case I bump into Phil from Causeway (inevitable, since they are one of the sponsors) and he grills me on my unsavory comments regarding his team within this blog, a couple of days ago.

Maybe it was too late in the night; maybe I was trying to be too clever –
but the post in question did not come out too well.

So, let’s stop bamboozling about it, and tell the story as it really went:
At a recent Causeway sponsored event (coincidentally titled Hollywood BIM) Tim Cole from Causeway, a professor based at a Dubai Uni and I were discussing the role universities have (or should have) in shaping the future of BIM in the AEC.
The chat was informal, before the official discussions.
Naturally, the question of the fine-line between education and training had come up too, and how various representatives of universities get hung up on doing one (or the other);

To make it easier to distinguish between the two, Tim told us a nice little analogy:
Let’s say your daughter comes home from school and says ‘we had sex education at school today’ – you might frown a bit at the news but will probably leave it at that;
if instead she told you that she’d had ‘sex training’ at the same institution – you’d be concerned in a different way;

I really liked this explanation and not because of the ‘sex’ component.
So, to put everyone back at ease, let’s rethink the story using ‘driving’ instead, as in ‘driver education’ and ‘driver training’.
Then, once we are all on ‘board’ so to speak – let’s go back to how much BIM education vs. training should Universities do.

Could they effectively educate people on an extremely complex ‘product-delivery strategy’ without ever going into the nuts and bolts of the workings of the various available tools?
Discuss theories devoid of real application – and I mean really ‘doing it’–
not just by analysing  ‘case studies’ or ‘looking over the shoulders of others’ experiencing the ‘real thing’?
Base their programmes on industry anecdotes compiled from poorly structured and misleading surveys?

On the other hand – how would they choose what tools to teach and what not and still be able to fairly educate on the subject of the ‘large picture’ BIM?
Put their hand on their heart and say that they really offer the best tools on the market for the BIM knowledge-seekers and aren't commercially driven by software vendors?

The distinguished academic appeared to wrestle this dilemma easier than I could, going one step further and saying that Universities should also SET the STANDARDS on “how to DO BIM”.

At this point I pondered another two-liner I heard recently:
Q: Do you know how to fly a plane?
A: I should think so - I never tried it before…

(sounds better in Hungarian, trust me) 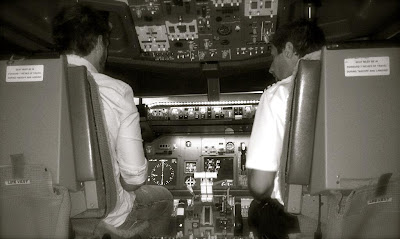 Picture of my friend Michael in a flight simulator – pinched from Michael’s FB;
Posted by Zolna Murray at 6:48 AM