Now remember to look up, now to look down! And now, through of course...

There is a documenting approach in AEC known as RCP.

When I first learned to draw complicated timber roof-structures, I was taught to ‘imagine’ a mirror that lies on the floor of the roof and draw what’s in that mirror.
Later someone helpfully pointed out that the same effect can be achieved by visualising the structure from above with the roof-cladding removed.
This principle of documenting roofs applies also to ceilings (RCP) as well as anything placed above the (imaginary) cutting plane!
Many other trades use mirrors regularly too, hairdressers and dentist come to mind.
Still, is it not highly risky?
The question I ponder is, why we, as an industry have stuck with this (archaic) technique of representing 3D objects placed in space while confined by the limitations of 2D (plan) projections.
It’s been done for ages, is doable, but is it not similar to doing long-division in one’s head?
Why is this way of communicating used on most of building projects still, when it requires significant mental effort from almost anyone that handles the drawings?
I go back to my friends in the construction-steel manufacturing industry.
They interpret look-up-look-down – imagine – mirror-and-reflect-back documents and process the information ‘traditionally’.
Then, for their installers, they output in low-risk, foolproof ways.
Not because their installers are less smart than other construction-document-interpreters that work in AEC.
Au contraire! 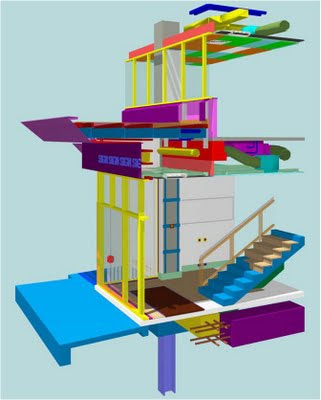 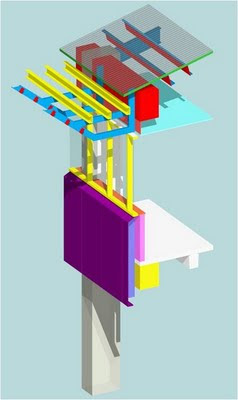