Is there solid evidence out there that BIM works? Yep: the Australians have it!

Just as I was putting up the question relevant to this topic on my blog* last week, a headline ‘liked’ by a long term LinkedIn-associate caught my eye:

“Given the efficiency gains possible with building information software (BIM), its use is growing fast…”

It said. So, I went and looked up the article, written by Michael Bleby and published online by the Business Review Weekly (brw.com.au);**
A short and snappy write-up, it offered a couple of interesting morsels for me to ponder over. Unfortunately I could find neither real ‘proof’ of the ‘efficiency gains’ he was referring to in his opening paragraph – albeit qualified as ‘possible’, nor for the ‘growing fast’ trend explained.
In truth, he did include various estimates from a report (originated in 2010) forecasting possible savings measured in billions (AU$) but all-in-all, had not offered the type of meaningful evidence I expected, reading the intro.

I’ve been an extremely impulsive person all my life;
it has been a great achievement of mine to have tamed this ‘beast’ to some extent over the last couple of years.
So, rather than ripping into the poor fellow straight away with my comments, or quickly write an obnoxious and whinging blogpost – I put the article aside for a couple of days.

Today, I set down to properly read through it, maybe even analyse the report (100 pages!)…

Surprise! It was gone!
Not the article, it is still there.
The first paragraph (by-line to the title) that started with the word ‘given’… has disappeared since…
Instead, it says: “Seeking Standards: The BIM Project”.

So, I’m going to put up the question to the writer of the article, why did he remove that particular sentence?
Who advised him to do so?
And why did they not (while at it) correct the sub-title “Who talks to who” further down the article? (it should be ‘whom’, I think) 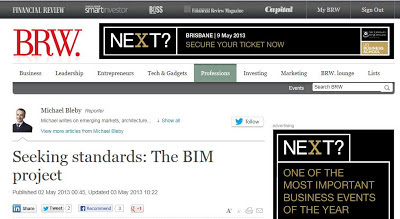