What drives what…BIM as an enabler?

One very much-liked claim of BIM promoters is that BIM enables designing architects to be better at what they do.
Like the good old ‘Red bull’ ad, they imply ‘it gives you wings’, ‘unleashes the creativity from within’, lets you fly freely without the constrains of the drawing, paper based or digital!

They often use Frank Gehry, the poster boy of the ‘brilliantly creative’ as an example of someone that made those whimsical, awkwardly beautiful buildings he is famous for, purely thanks to BIM.
I find this interesting, having watched a documentary on Gehry numerous times.
For me, despite of all the wizardly around him, he looked most comfortable working with pieces of shiny paper and folded-up cardboard.
And possibly ‘in his mind’, like many truly good architects have done for centuries and probably still do.

But, let’s put Gehry and other ‘iconic’ architects aside and look at the ones closer to home.
I’ve been involved with a project for a year now that had ‘obviously’ been designed using a digital model.
Not a bad thing on its own, had the designers taken the model ‘all the way’ and ensured full coordination between various disciplines and documents. They did not do this – an issue and its consequences I will not discuss here, for obvious reasons.

There is however a question I have been asking myself while looking at the ‘ins and outs’ of the project that has ‘public good’ relevance:
Have the architects been ‘using’ the capabilities of the digital modelling tool to enable them to come up with the ‘weird and wonderful’ or has the model instead been driving them and the design into some risky areas normally they would not go to?

Next, the follow-on, more generic questions:
Can the ease of making credible looking models of yet-to-be-built buildings distract designers from doing proper due diligence on constructability?
Can the way models behave possibly encourage unconscious complexity of forms going well beyond practical?
Are the models really able to tempt, lure, and seduce the designers into dangerous territories?

Make them use angles, twists, curves and steps when cleaner, simpler, straighter would do the same or make it better?
I know, this line of thought could lead to opening the ‘can of worms’ about  design styles, aesthetics, client preferences etc…
But, it is not my objective to stir up that dust-cloud just now –

I am genuinely interested by the relationship between the toolset-the user- the end design.

Another example:
I can use it a bit more freely since it is public and with pictures on the net, although not yet constructed.
There is an amazingly ambitious roof-shell designed for ‘a’ villa on an artificial island that is definitely a collaborative brainchild of a creative (young?) designer and a faceless surface modeller.
For a bit of fun (again without questioning beauty or appropriateness of the design) I looked at the scale of the thing and made a mental collection of question of buildability.
To give a good understanding of the true size of the structure – I placed a car and a person alongside.
And for those that like citing manufacturing as the example to follow with AEC processes, I enlarged the V-Dub 7.5 times to fit under the shroud.
Idealist BIM-mers will tell me to stop being so negative and let ‘designers push the boundaries of their imagination’ with whatever tools they wish, as only then will true masterpieces happen and BIM tools reach their rightful potential .

A bit like an ambulance driver that has seen too many sad results of irresponsible speeding, I can only repeat what I said numerous times before:
BIM is as much a weapon as it is a tool.  Potent and dangerous.
Handle it carefully and with respect. 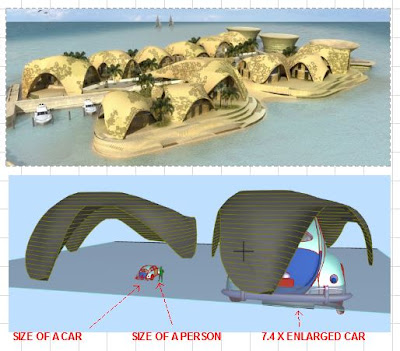 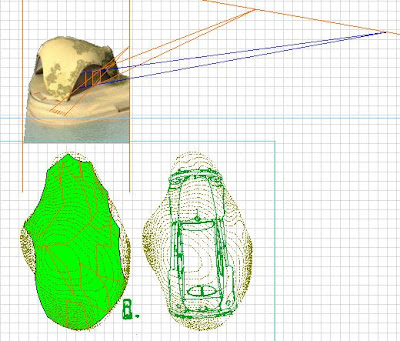 Sketches of Frank Gehry is a 2006 American documentary film directed by Sydney Pollack and produced by Ultan Guilfoyle, about the life and work of the Canadian-American architect Frank Gehry.  http://en.wikipedia.org/wiki/Sketches_of_Frank_Gehry