Why will mandating BIM do nothing to improve communication between AEC parties on projects...

Many problems of poorly executed AEC projects can be traced back to uncoordinated documentation.
The blame for the latter is usually assigned to ‘inadequate communication’ between the practitioners of different disciplines and in turn the tools they use.

Bringing BIM into this, promoters of the ‘new’ BIM-approach tend to build-up their arguments based on the theory previously described and propose, that within similar circumstances ‘superior tools’ will make the SAME practitioners communicate superbly producing extraordinarily good, coordinated documents.
All else staying equal, they imply, changing the toolset will make the results significantly better.

I see this as a case of arguing from a false premise.
While the reasoning might sound totally credible to the hundreds of thousands of BIM-enthusiast of the global AEC, that are spreading it like a mantra, for me it makes little sense.

First, it attempts to re-interpret history, to cover up for other, significantly bigger issues that are holding back the industry, like widespread incompetence of its professionals and gambling-like environments for delivering projects...

It suggests that for thousands of years before BIM (and CAD!) AEC related professional-people due to their lack of access to these ‘superior tools’ were unable to communicate and deliver clash-free, coordinated buildings.

Oh, no it does not say that! – one might be tempted to counter-argue.
You can’t compare the two eras, things have changed drastically; buildings are more complex, markets more competitive...
Blah-de-dah...the works...

OK then, what if, due to some weird magic, a generation of engineers, architects, construction managers and builders of the past turned up now and we could assign them the tasks of delivering our ‘buildings of more than ever complexity’ – would they really be paralysed, unable to perform due to lack of CAD or BIM skills? Unlikely;

What I know from historical research, a lot of them would get on with the job and do it properly, no matter of what toolsets they had at hand.
Some would use their old and tried communication methods; others learn the new ones....

The problem is not in the tools, it is in the people, an entire industry-wide group of people that have lost (or never acquired in the first place) the ability to deliver projects successfully.

There ARE exceptions of course too, exceptional individuals working in the AEC, teams of them, even companies, but let’s not get bogged down with them on this particular issue, because they are a minority by far and are usually not the ones that set the direction for the rest to follow.
Unfortunately.

My reading of the industry stands as:
The SAME practitioners that operated poorly in CAD environments will not operate well in BIM environments.
In fact, I can bet my last dollar that they would-have operated even worse in the pre-CAD environments.
Most likely, would’ve never survived under those ‘traditional’ conditions...

In my opening question, I hinted to a belief that there could be alternatives to mandating BIM that have the potential to achieve major improvements in the performance of the industry.
I’ll write about them soon and the ‘fluffy post’ from a couple of weeks ago is a good example of one. 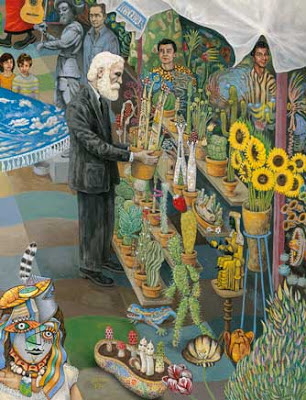 Gaudi’s world poster:
http://www.barcelonaprints.com/gaudeng2.html
Posted by Zolna Murray at 8:38 AM