Today is a public holiday in Hong Kong …

That's good news for some of my minders, they’ll have a day off.

The others, dotted around the world aren't that lucky, unless of course they are based in the ME – where Fridays are off, anyway.
Out of pure generosity, I’ll make their jobs easier today – in case they are on-call because their counterparts are working and are pressuring them to do so too – and volunteer progress on most of the current projects I’m running, including pointing out where I may not have properly dotted the ‘i' s, crossed the ‘t’-s or bent my own, pre-set rules and deadlines.

1/ The sale of the ‘small share’ portion of Murray Murray Associates (yet to be formally formed company) is now officially closed;
http://debunkthebim.blogspot.hk/2013/09/are-you-associated-with-global-aec.html
Unofficially, of course I’ll let all of those friends that had said to me ‘wait for my next pay-check’ ‘first of October’ ‘new job’ or ‘when I convince my wife that this is not an act of flushing money down the drain’ to still have a piece of my ‘yet-to be baked’ pie.
Go for it, still 994 small-shares left, 100 US$/per piece.
There is one of the paid-up ones that I can’t identify the owner of – this may mean that the person will email me soon to clear up the mystery, or it is the first instalment of the previously described ‘integrity fee’ levied against 2 companies yet to be honoured.
They will be pleased to know that this first instalment had arrived safely – the rest, 999,900 US$ can be deposited into the same account.

2/ The silent auction on the 65B MTR experiment had been officially closed too;
http://debunkthebim.blogspot.hk/2013/09/for-one-of-many-hk-contractors-that.html
It had been a hugely successful exercise as a ZERO (0) number of entries was submitted / received.
Great to know that the across-the project confidence of this ambitious BIM endeavour is at such high-level that my generous offer was not tempting enough to any of the involved contractors.
This will mean a lot of juicy work for MMA for years to come, here in Hong Kong and anywhere else these companies will operate; or in the unfortunate event that MMA does not survive till then, for another equally competent Forensic BIM-ming enterprise to make a mint out of some blatant ignorance exercised by some at present.

3/ The feeling of success that the previously described task-sets have given me is being slightly dampened by the failure (so far) of the ‘pay up or take it down’ campaign of mine – I must confess;
http://debunkthebim.blogspot.hk/2013/09/dear-mr-thomas-ho-public-letter-to-ceo.html
But knowing that there is a large, international team working on it gives me confidence that we will get there soon;

From this point, my minders can check out from reading the post…as I’m going to indulge in writing about the nicest people I’ve met living at any-one time on any-one place in the current times and these are the people of Hong Kong.
A bit of an expression of regret for not taking the time to learn what this ‘mid-autumn holiday’ was about, not even tasting the moon cakes that are being sold everywhere.
I've been so caught up in our own little ‘survival game’ that I failed to show a basic courtesy to the city that has been good to us, so to make amends a bit, I’ll share a list of tiny/sometimes wonderfully contradictory observations on the people of Honk Kong:

There was the girl that served me at Starbucks a day or two ago, stone faced and cheerless, yet ran two blocks after me when I left my umbrella behind.
There was the young chap with his ears plugged in and eyes glued to an iPhone that pushed in front of me on the MTR escalator to then gently guide a complete stranger with a white-cane through the paying machine at the top.
The two little old ladies breathing down my neck as I tried to manoeuvre across the ding-ding’s turnstile to then squeeze up on the narrow bench, fully laden with shopping trollies and all, so I can sit down beside them.
The tiny old Chinese man that rearranged half of the other bench of the same tram, full of teenagers so my husband can sit down, as well.
The entire crew of the local food court needs mentioning too, that would find a free table for us at the busiest of times, especially the young chap that will take the used trays away even though they do not belong to his zone.

This will sound cheesy, and heck’ who cares – but I've lived in 5 very different countries all over the world for prolonged times and I've never seen so many truly and genuinely down to earth nice people as here, in Hong Kong.
Even the ones doing the hardest and by-some standards lowliest jobs will smile at you if you make eye contact with them, there is no such thing as a lift too full to let you squeeze in or a footpath too blocked-up to ground to a standstill. I once saw a woman carry a proper-thick, full size bed mattress folded in half onto a train and no one bet an eyelid around her.
Even when a distracted taxi driver ends up stuck in the middle of an intersection blocking half a dozen trams from moving; their simultaneous tooting has a cheerful and only slightly annoying tone to it.
The business owners that plaster the fronts of their premises ‘with no waiting’ signs at weekends when maids have their days off, yet quietly tolerate rows of make-shift cubicles of cardboard boxes erected and utilised for temporary picnics, book clubs, churches, hair salons and who-knows-what every Sunday.

The ‘live and let others live’ phrase seem to be the perfect description of the daily life of HK.

I had met one or two back stabbing, highly paid and dirty-scheming directors first hand too, very early after arriving here – but this is no time to ruin the festivities for the others, close to 7 million of them.
So, whatever you are celebrating today, enjoy it Hong Kong!

(views  in/out if our bedroom windows); 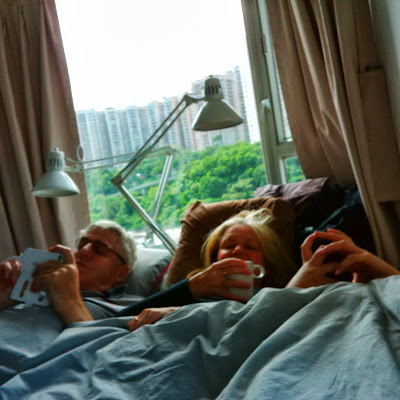 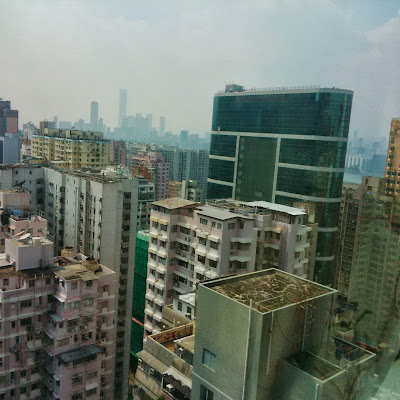