‘Don’t worry mate! Everything has been done by the book! She will run out of steam, soon enough!’

A message similar to the one in the title could be bouncing around the globe, courtesy of a number of highly paid damage-controllers, hired by the companies that keep putting themselves in my sights, over the last couple of weeks to get me to turn the blind eye.

See, these companies may be very good in consistently completing their AEC projects after time and over promised budgets. As well, they are pretty good at keeping the media under control.
Ok, little bits of ‘cautious messages’ of ‘challenging times’ may get through from time to time to soften up the shareholders for yet another big write down – but these are so carefully choreographed that one has to be eagle-eyed to see anything worrying within them.

So, I have not been surprised that my press release from a couple of days ago (check link at the bottom) got ZERO airing by the official media, not just where these guys operate (which is pretty much everywhere) but even sites that like to publish ‘odd stuff’ appear to see  nothing odd with this little hot potato.

Take for example the New Zealand media. I’m being a bit biased here, I still check it daily.
New Zealanders are proud of their independent and free spirit (remember David Lange and his Nuclear-free legacy?) not to mention how fast and snazzy they are on the water (America’s cup?) – and according to Leighton contractor’s own website New Zealand has the aussie contractor involved on more than half a dozen publicly important projects.

You’d think that in the spirit of the Women's suffrage in New Zealand from the late 19th century, when New Zealand was the first to give women the vote in modern times – they would give another New Zealand woman a chance to voice her concerns about the activities of companies building on their soil, maybe using their public money?

But no, not even on the ‘odd stuff’ page of the ‘stuff news site’ could I get my press release published.
Odd.
Maybe someone like Murdoch who has just delivered his native Australia a new Prime Minister, owns all the NZ papers and likes to shield the odd builder from scrutiny.

So, for now it looks like I’ve got to stick with this humble little blog as my gateway to the world.
I would not be surprised if the damage controllers have tried shutting it down too – buying Google may be easier still, than dealing with the issues I’m raising in-an-upfront and honest manner?

Time will tell – let’s just hope Google refrains from shutting me down till the job I need to do is done. 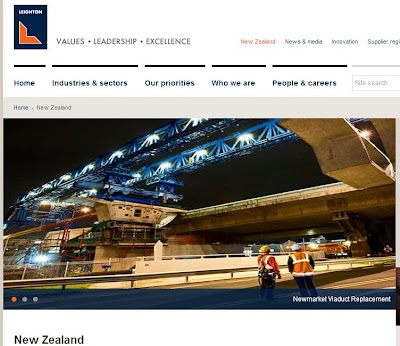 
http://www.leightoncontractors.com.au/new-zealand/
Posted by Zolna Murray at 7:36 AM