Don’t you wish you were me? (a touristy but slightly stinky story)

I’m sightseeing today in Hong Kong.
Standing on a footbridge between two MTR stations, I overlook the busy construction site of the West Kowloon Express Rail Terminus being built by the heavyweights of the local AEC, the Leighton-Gammon JV.
If you look carefully at the picture, you’ll see me holding up a public notice that is asking people to clean up after their dogs.
On my right is a nicely designed fitting of a snazzy piece of urban furniture, conveniently located for the use of obliging citizens to dispose of the smelly stuff after their pets have relieved themselves on the public footpath.
It is nice to see how Hong Kong people care about their city.

They must also know that a little bit of dog poo left on the tarmac will go a long way within minutes – spread around by the millions of people that mill around this place almost any time of the day.

So with this unwholesome aspect of the co-existence of lots of people and many dogs within the city under control, one would hope that they will look at some of the unwholesome aspects of other entities that are sharing their lovely place.

For example the two giant creatures playing in the mud below the footbridge I’m standing on.

But, the public of Hong Kong does not seem to be too concerned how they are getting on, if they were I would not be all touristy today.
I’d be advising some or all of their government agencies on how to up the game and get better results from their AEC suppliers.
I could really help them tidy up some of the mess those guys and their peers have inflicted on publicly funded projects.

But no, they are in no hurry to seek my advice, obviously.
They may even secretly wish that I never landed here – a bit like when Edward Snowden chose Hong Kong as his first refuge. Incidentally, we arrived almost on the same day here.
Maybe the people of Hong Kong are hoping that I will stop poking around their charming city and construction practices and flee quietly like Snowden, to Russia or the Latin Americas.

That may not be such a bad idea after all – apart from messing up the kids’ schooling again – those places are on their ways up, there I might find some strong AEC companies that will be interested in my offer to knock these two guys out of the global market for good.

Then, I may not need to go quite that far: how about Mainland China?
Surely there are plenty of robust constructors there that are looking forward to seeing the backs of some phoney aussie and pommie companies and would be interested in the toolset I have, that may get them a piece of the Hong Kong construction pie?

I don’t even need to fly there – can take the MTR.


Can’t really afford to wait for the express rail to be completed – these guys seem to make a point of delivering late; 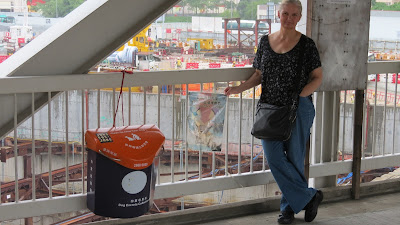