Says Ella to her sister, and the saying makes it to the album of family ‘classics’. Forever.
I remember it too as I observe how often cars are stopped inside roundabouts in the city I live in. ‘What a hazard’, I think trying to dodge them and the other drivers feverishly speeding as well as manoeuvring around the stationed vehicles.
A nuisance that a car stopped within a roundabout can be, it also turns to a delightful parallel for the ‘number one hazard’ of construction projects:
Stopping. Causing others to stop. Or even just threatening to stop.
Specially at a place where keeping-on-moving is critical to success and even a little stop can be extremely costly.
There is a BIM relevance to the above described little vignette and its construction equivalent.
I see BIM to have good potential in highlighting where those vital stops occur.
And, we should be using this potential widely!
Whether you talk about 4D, construction sequencing or graphical representation of planning data, BIM can be employed to identify those places in construction programmes where ‘stops’ can become critical, their cumulative effects to the project even detrimental. BIM can help!
(I tried to take a photo of a stationery vehicle within a roundabout but turned out to be quite a difficult thing to do.
Nowhere to stop safely. I modelled one instead.) 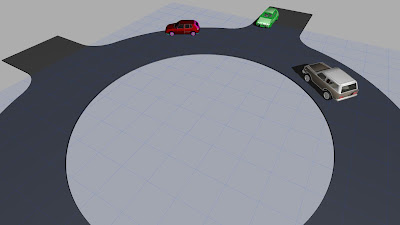