Global AEC is limping, hobbling. It should be handed over to our children. Turn it back into a viable career choice and let them thrive and contribute to its recovery!

Prologue: This blog-post is written for the millennia generation +/- one or two;
They do not like reading long stories, I will work on a shorter, more digestible one for them – something that can be tweeted or texted;
This is aimed at their parents and caregivers, who should still be able to handle a 2 page article.

Nathan Zraicat looks proudly over the Melbourne construction site as the photo gets taken (REF 01), with his hardhat, safety vest and glasses, a poster boy for the AEC industry and the company he works for, Leighton. (REF 02)

Meanwhile, half a world away, his father, Elias Zraicat (REF 03) in the role of the  Executive General Manager, UAE, Oman and Northern Gulf of HLG, another Leighton Group associated company, is busy tidying up the mess he has been left by his predecessors.
It must have been a very big mess. The company’s top management made a hard decision to relocate the project director of one of its key projects in Hong Kong, by now publicly known to be in a bit of a trouble itself. (REF 04)

While I look down the big hole that Mr Zraicat left behind in Hong Kong, (the unfortunate West Kowloon Terminal of the Express Rail in Hong Kong, (REF 05)) I can’t help being jealous at his parenting success.
There is the proof, clear as the sun, his son steadily walking in daddy’s path, towards a flash Leighton future, safely tucked away in peaceful Australia, while I drag mine around the world and have no idea how I am going to feed them next month, let alone get them through university.

As well as differences in our parenting success rate, Mr Zraicat and I have very little in common.
For example, for decades I’ve been working on exposing the story of a deeply corrupt global AEC industry.

Forget kitchen alterations, bathroom refits or even new houses built for individual clients.
The big money and murky deals are higher up, where the mega projects of our built environment are arranged.
The media do not seem to care. The public are given no hints.
“No blood in it” they might think, or “it’s not tainted milk powder poisoning babies”.
The big money and murky deals are only about building our most valuable collective assets: hospitals, schools, roads and rails.
No big deal.

My audience from within the industry that I have entertained over the last 20 years with my theories of the corrupt AEC had almost always split unevenly onto two groups;
The first, a large majority would say ‘no, it is not’ and believe it.
They’d carry on obligingly climbing the limited staircase of their careers by keeping their profiles low and sticking to forever designing cheap office layouts, calculate bending moments or size sewer pipes.
The second group, a small minority would also say ‘no it is not’ but would not believe or live by this statement. They’d ignore everything they learned in their architectural/engineering/construction management schools and focus on building one thing only: their careers.
You’d recognise these guys on the boards of all major AEC companies, often light blue shirted and with loudish ties, bald and pot-bellied – or tanned and over-trained, inevitably male.

Unable and unwilling to fit into either groups over 2 and a half decades ago, I set off on a doomed road of building up a career in AEC while retaining some self-defined level of personal and professional integrity.
First I put one house up to fund this quest, then another, then another.
The proceeds all went eventually, also lost in the game were the various companies I poured my energy, time and money into, trying to bite the ankle of this ‘loosely defined monster’ and move forward while keeping the family afloat in New Zealand for close to 18 years.

Ending up with nothing but chased by a bank with a half a million dollar GFC-fuelled  debt – I set off globetrotting – dragging the family behind.
Over the next 5 years I managed repeatedly to land respectable roles within respectable companies – only to lose them one way or other due to identifying and exposing high levels of negligence, incompetence and corruption.
After the last one, getting fired within 12 weeks, my personal best – I found myself at the end of this road.

Now, you can join the queue of many that will quickly conclude that I am basically unemployable within the AEC, incompetent to hold a job down and am trying to cover these flaws up with all sorts of made up ‘conspiracy theories’.
Neat and convenient, yet the facts were falling in exactly the opposite direction.

But even without the facts and proofs, and even with taking me out of the picture, don’t you think that there is something very fishy about this industry?
And what is most fishy, is how it treats ‘the young and bright’ that end up in their midst.

Unlike Nathan from the beginning of his story, most cannot look forward to bright steady rises through the ranks of the corporate ladder.
Droves of young, bright and enthusiastic would be architects/engineers/construction managers rise from their schools to the industry. They are then quickly hit by the reality that this industry punishes anything that has to do with innovation, progress or threatens the SQ in any way, for those that have their paths to happy retirement planned out decades in advance.

So, these young talents end up in two groups as well. The first will pull their heads in and join the fathers and mothers of previous generations that have fallen in line accepting that things just have to be the way they are.
They will end up forever drawing door schedules, create thousands of meaningless CAD drawings and left being manipulated into quasi BIM monkeys by their superiors, themselves often only foot soldiers to the truly powerful top management.
The others with a bit of spark and integrity will leave.

And the cycle will carry on like this, the next generation of intake will have even less bright and ambitious ones contemplating any questioning of the modus operandi, moving the industry even further into corruption and anarchy.
And the public will still not know, it is not like they are tainting milk powder or making land mines.

This must stop, for the sake of the generations to come!
Hand over the global AEC to our children as a viable career choice where they can thrive and contribute to its recovery! 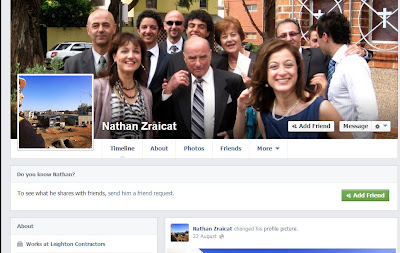 May also want to check this link:
http://www.youtube.com/watch?v=10wglvalScw&feature=youtu.be