Who are the ‘A list-ers’ of the ‘Society of High BIM Maturity’?

(or, is there any relation between the ‘factually’ very low level of BIM-maturity of the industry and the aggressive buy-outs happening in the AEC’s consultancy-field?)

Recently, on a well-attended BIM group’s discussion site, I re-floated my view that the UK Government has little idea on what BIM really is, or should be like.
After a couple of days of debate and gentle lecturing by a number of learned participants, a consensus was reached:
‘I don’t know what I’m talking about – let alone question, could I please go away and grow up in quiet or eat worms, whatever is going to make the least noise.’

So, having arrived to such a happy and universally satisfying ending … I let the topic fizzle out.

Still, there was one commenter within the thread that bugged me just a bit more than the others.
It was not even his comment that annoyed me that much, but the fact he was working for a particular company and referencing it as something equivalent to a ‘mature BIM practitioner’.

I will not name the individual, let’s just say, on this particular forum, he represented a large, big-name, multinational AEC consultancy, starting with the letter ‘A’.

Ha, you may say, that is not really helpful, don’t they all start with ‘A’s?
Or most of the big and multinational-multiconsultancies?
Indeed, they do.

The ones still sticking with their old names in spite PR advisers’  suggestions and/or multiple mergers and by-outs, I guess do this probably after weighing up the pros and cons of ditching a moderately valuable brand for something that will stick out from the Aecoms, Aurecons, Aedases, Arcadises, AMECs and Atkinses…

But, I digress…
What the participant of the forum was implying to me, that not only was himself as a person ‘very’ BIM mature, not even all of the projects he was working on, but the ENTIRE multi-multi company he was representing.

Now, that is hard to accept.
Especially because I’ve had the fortune to interact with various representatives of this entity in numerous locations scattered around the word (some very recently) and I can clearly state that this company is no more BIM mature than most of the other ‘A’ listers.

So, since this discussion, I spent a bit of time in re-thinking of what ‘maturity’ could mean in the BIM arena, prepared to find that I am really the totally misguided one here.

Is it just age that will set its level – as in wine – or would certain behaviour be expected from a certain level of maturity of BIM?
Just like, when we talk about maturity of people relevant or irrelevant of their age?
Are there different levels of BIM maturity for individuals, projects and/or companies and how are they related to each other?
Can an entire country really achieve something that independent assessors might value as ‘mature BIM’ in the near future?

So, as a due diligence against self-justifying arrogance I mentally collated all my knowledge of the A-listers I know and/or had personal dealings with, who incidentally through various buyouts over the recent years are present on most of the biggest projects in the AEC happening globally.

Admittedly, by now they all have dedicated BIM specialists on board, have dreamed up a fleshy  BIM manifesto and claim to have the commitment of the ‘topest’ management.
Also they proudly sponsor a crew that flies around the world representing them at BIM conferences.
And a number of ‘pilot projects’ showcasing their advancement, nicely repackaged for all flavours of BIM.

But, I can bet my top dollar, that once you scratch the shiny BIM surface, you will find that most of their projects are still done ‘traditionally’ – their so called frontline, BIM enabled people used to answer to CAD titles until very recently and their BIM processes are pretty much ‘under development’.

Furthermore, if you are an unlucky client, already locked in a contract with any of these A-lister chaps and hope to squeeze in some Q&A on your project post-contract by utilising their over-marketed BIM maturity, the answer will most likely be:
‘we had not priced that in’.

BIM after all has a clear  price-tag attached to it.
I wonder, when will my teenage children figure out to give a similarly clever answer justifying their immature behaviour questioned occasionally?

As in, ‘sorry mum, I know you would not expect from a mature person to behave as we acted at Grandma’s but our maturity is pretty much limited to certain places and events, when it comes to family gatherings, we only allowed for ‘traditional’ teenage behaviour’.

It goes without saying that this example is totally hypothetical, my children always behave perfectly at family events. I guess, they are mature beyond their ages.


Not something that can be guaranteed from the A-listers of the oh, so mature BIM High Society; 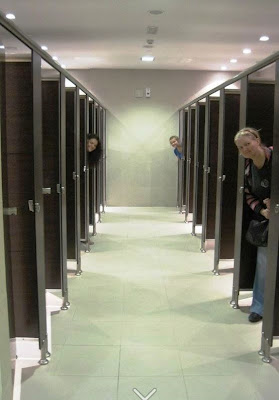