Michelangelo and his mates would have been great at BIM

It would have come as totally ‘natural’ to them.
Furthermore, I think they would have been quite offended hearing of the concept hailed as a ‘fundamentally new and different way of thinking’.

Actually, what would have taken them much more by surprise, should a group of his contemporaries land in the current AEC, would be practices borrowed from the dark-ages and employed to mislead and deceive the ones dealing with information on buildings.
I could imagine sheer horror on their faces recognizing that the current self-claimed ‘masters’ of the profession are by and large hands-off managers, conductors of orchestras, themselves unable to read the ‘music’. Poor gamblers of other parties’ money in an unregulated industry.
I see their pretty Renaissance heads shake in disbelief at the sights of senseless CADding performed around the clock in drawing factories of many thousand ‘acclaimed multinational consultancies’.

Modern computer games may placate them a bit; watching 3-4 year olds build cities on their ipads could provide signs of promise for this strange era they found themselves visiting, so I hope someone thinks of taking them to places toddlers gather.
Should that fail, even surly teenagers running the lives of their non-renaissance-esc proportioned avatars on SIMS should be of more interest to them than observing the cream of AEC academia discuss the future of BIM.
Definitely no BIM conferences, please! 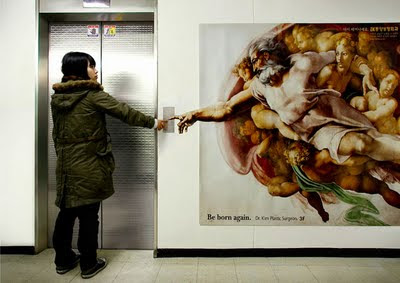 Picture: plastic surgeon, Dr. Kim, of Beverly Hills has Part of Michelangelo's The Creation of Adam incorporated next to the elevators. (various sources)