A friend of mine asked me recently, how come I was not worried about being unemployable for life due to the ‘things I wrote about certain companies’ in my blog-posts over the last couple of years?
He also added that it would be a ‘brave bastard’ (his word) to employ me in any way after the things ‘I’ve been dishing up on certain ‘large’ entities…’
Jokingly, he finished his thoughts with questioning himself and if he should trust me any-more and at all  with any personal data – in view of my ‘behaviour’.
(this is a ‘seriously close’ friendship that has been in existence for close to 3 decades)

Forgive me, and my naivety, but what has the world come to?
The last time that I remember that I knowingly mislead anyone was when my daughter cut her knee on a jagged piece of mosaic (and I’ll tell that story separately one day, no big deal, really) –
I am as straight as they come.

I have a terrible memory to keep even the shortest lies going-on  and look after ’made up’ stories, so I say things as they are, keeps it easy for me.
Is this really such a big crime? I see fraud - I report it – if it gets not acted-on (in-house) eventually I write it up to the public to make its judgement on it.
Where I see negligence, incompetence that causes other parties lose money, I point it out.
First to the ones involved; then, if no one cares, to the ones above.
If the impacted party is too removed (like a public-client or society at large) I try to get the average ‘Joe Blogs’ take ownership of issues and start to care.
Mostly unsuccessfully.

It is construction after all. Concrete, bricks and mortar. Very un-sexy.
Not rocket science, not even medical stuff where answers to tricky questions would mean the difference between life and death.

We build buildings, small and large and the questions I raise are most often about how clients’ money is spent in construction processes. Spent or squandered;
Mostly wasted through blatant negligence.
And quite often we do talk of a lot of money
And more often than not, ‘people’ do not want to know.
Construction is, as it is. Everyone knows: Uncertain.
Bless it’s heart AND keep it that way!
So much easier for everyone to keep their highly paid jobs!

Still, just because I publicly say any particular company is incompetent to build any building to a set budget and set time-frame, and the impacted party is more than happy 'to forgive', should I be the one and the only one left penalised?
Should I be the one to see all my friends shy away from telling me little friendly secrets, because I'm a certified ‘nark’?
This ‘fact’ is hard to accept.
It would be the other way in almost any other industry
Bring me the Mafia, any day!

One can be a defence attorney or part of a public prosecution team and have a proper social life.
One can work as an auditor for any IRD and still get workplace gossip handed down freely.
.
One can even be an ‘f…’-en parking warden and still keep seeing friends.

Why can’t I speak frankly about the global AEC and stay employable, let alone retain a handful of friends that will share a joke or two with me?

Is it because this industry IS more rotten than the medical, judicial and political sector combined together?
Could be! Think about it!
Go back to that ‘watchdog idea’ I wrote about a couple of weeks ago just as a reminder…
http://debunkthebim.blogspot.ae/2013/09/cops-and-robbers-in-aec-has-anybody.html

(picture here is taken 24.5 year ago when I become an architect –soon to turn into an unemployable, highly over-qualified, dangerous nark! Maybe not as soon as I faired , but it happened, anyway) 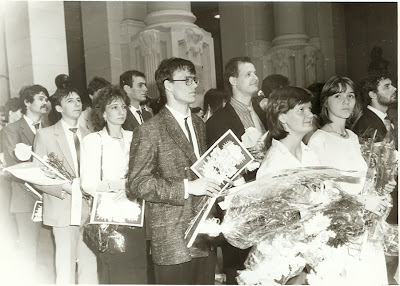