Is it me, or is this total nonsense: The trouble with the BIM ‘triangle’? (my reading of the Bew-Richards BIM graph)

Ever since the UK Government had announced its ambitious plan to become fully ‘Level 2 – BIM’ by 2016 I’ve been uneasy about the idea and voiced my opinion on it, here-and-there.
My main concern was not with the audacity of their proposal, nothing wrong with putting the bar high enough to induce a bit of an industry struggle, but could not easily stomach the way they had defined BIM Maturity levels and especially unhelpful I found the Bew-Richards BIM graph to be.

Before jumping into public criticism, I had made an attempt to understand their system of classification, frame of reference and organization into a graph that could be considered a standard Cartesian coordinate system.
The horizontal axis I read as the ‘tools’ the vertical measures BIM ‘maturity level’.
The resulting graph is a steadily rising line between, ‘below 0 maturity’ and ‘level 3’, also expanding beyond, related to the addition (and I guess replacing of) various tools of data-capture and management.
BIM maturity level starts at 1 and anything CAD is considered below…apart from when one CADs in 2D using some sort of a process, then one can be called 0.5 or thereabout.
It really bothers me, that there is variation to the line – i.e. it climbs before reaching 0 – can one be negatively mature in BIM, measurably a little or more, depending on how one CADs?

Come to think of it, there are many industry participants that I’d classify as ‘immaturely BIM’ but probably not in this context.

Maybe, the illustration is not meant to be a simple 2D graph but has 2 horizontal axes one on the top of one another.
Or it is not a graph at all; just a loose visual representation by someone trying to make sense of something terribly complex.
If the latter is the case, I genuinely empathise with the authors.
The complexity of the issue of BIM is huge and very hard to illustrate, being so multi-dimensional, and I’m not referring here to the standard 3+ D’s of BIM, but the historical, political, financial, economic, cultural, technical and other factors that play major roles in the shaping and potential improving of the field.

Still, in an industry overwhelmed by engineer-like-thinkers, should we not be a bit more careful on how we represent our ideas?
Making something look clearly measurable when in reality it is not?
Especially when the results can be such far reaching or damaging as forming the baseline for a government mandated process?

But others may still say…
‘it is YOU that the problem is with, the image makes total sense to everyone else. ’


I welcome further explanations on the topic. 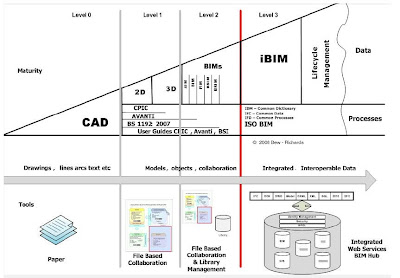