I thought, examining the little office-kitchen object.
I found it in Archicad’s Object Depository while searching for something else.
Created by Tibor Szolnoki and uploaded in 2006 (5 years ago!) it is a very smart example of good object-making.
Strangely enough it was not the high-level of parametric-versatility nor the clean interface that delighted me most, but the automatic/simultaneously updating ‘projection dump’ it also offered.
The object was obviously designed to be used within Archicad and supposedly by professional kitchen designers, yet the ‘output stamp’ was so highly pre-created that anyone with access to the software could make use of it.
Must have been a flop – I found no recent updates.
As a significantly different take on the same task-set, ‘kitchen (and other room) planners’ have been the first examples of attempts to create technically clever yet easy to use branded applications aimed at both professional and amateur designers.
I wrote about IKEA’s example before, following the ‘bread crumbs’ of the office-kitchen object on the www took me to another: ALNO’s, built on a similar concept.
Numerous other companies have gone down this track recently, ditching the idea of writing objects (families) for ‘mainstream’ BIM packages, opting for stand-alone applications.
While I supported their pro-activity in the past in principle, the said approach now feels like a dead end road.
Bring back the clever objects! 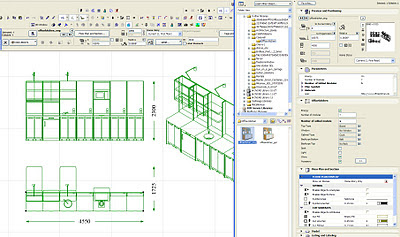