Not strictly BIM: the nerdy cup!

“Jonny, get up!” Is the Hungarian name of a toy, that works on the principle of self-righting itself whenever someone tries to knock it over, thanks to a strategically placed weight in its bottom.
It is often depicted as a clown or a doll with a nicely rounded backside.
The concept is also used by designers of drinking-cups for toddlers.
I wish someone had commercialised the adult version of this drinking vessel, many a computer would have its electronic life extended by it.
Have tried locating one on the net but found only speakers, toothbrushes and standing-lights benefiting from the physics of their counterweights.
Staying with computers, still not exactly BIM:
I was sad/surprised to learn a couple of days ago how all the lugging of two laptops and an obscenely-heavy power-unit (for the HP) had done little good to my arm-muscles and totally failed to help me pull myself up on a 1.5m high wall.
I got locked out of our house and repeated bell-ringing, yelling, treats and threats failed to get my youngest daughter to open the front door.
I peered longingly at the wide open back door over the previously mentioned concrete fence-wall, while numerous neighbours prepared for Christmas Eve celebrations.
Talk about embarrassing.
Not as much as pouring a large cup of tea over two laptops though.
In a single sweep. 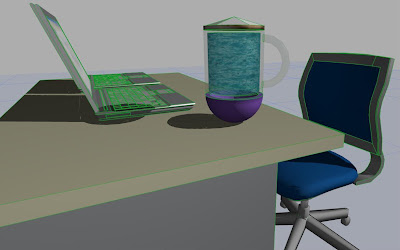