Confessions of a BIM practitioner of a ‘dystopian leaning'

First, let me introduce you to the term of ‘a dystopian BIM practitioner’.
I never knew I was one of those, until Mr. F recently called me such.
Don’t get me wrong, I was not offended one bit, just got me pondering over the possible meaning of the term.

True, over many years now, I have been cementing my image in the field, as being forever negative about BIM and its immediate prospects to grow, help productivity, cooperation and innovation.
Still, I always laced my grumblings with a some optimism and hidden signs frozen in invisible snow, for ways forward, in even the most of my negative of outbursts in the blog.

Maybe, that wink at a brighter future was missed by others.
Maybe, I have gone a bit too far with criticism of those involved with BIM and overall the outcomes of their endeavors.
Maybe, I hurt too many of well-meaning, little BIM ants.
Maybe.

First, many years before it became live, I predicted, that the ‘British wholesale BIM Mandate’ was not going to work – even though the letters behind the names of those driving it, could complete the entire alphabet, I guessed, that all of them  put together could hardly model a barn or a small outhouse at any LOD, even if their life was depending on it.
Let alone schedule things out of it, or COBie it.
It was a lot of theoretical BS (and I do not mean ‘British Standard’), spread over aggressively in a country always eager to lead the world, and the slight whiff of it is still hanging on.

Then, I’ve been forever poking pins in the voodoo doll of ‘Building Smart’ and its voodoo baby, the IFC – pointing out all the issues of the BIM equivalent of the ‘United Nations’ trying to run one of the largest global industries, based on a toxic mixture of corruption and ignorance.

Then, I got even more brand specific, called Revit a ‘dog’ (many times) and analyzed/described its impotence in minute details, hurting the feelings of many a follower of that particular software.
(I am feeling really bad about that now, many are good folk, just totally misguided that sold their souls and abilities of critical thinking for the sake of their careers).
My guess is still, that once they, themselves will feel sill, when they truly face up to the fact that for decades, they have been pushing a ‘horse-cart’ under the cardboard mockup of a Ferrari and pretended to be at the forefront of the industry.
(their own children may help in this realization in times to come – comparing the super-duper Revit's lack of capabilities to cheap-or free off the shelf applications these children use).

Bizarrely, I have been even more cruel on my truly beloved ArchiCAD, treating it as a clever and sleek, but mostly useless gadget, when put to the task of shaping the future of the Global Construction Industry.
A often see the direction ArchiCAD is following as if putting a pair of designer, round glasses or a black turtleneck on an (professionally impotent) architect. And selling this achievment to the global AEC world, time and time again, as a true innovation.

Still, rather than thriving to be ‘the Banksy of the BIM world’ (how pretentious that would be!) or secretly dreaming of streaking naked through an international BIM conference with a provocative slogan scribed to a sign,
I do spend substantial amounts of my thinking on positive thoughts and search for the solutions on how the potential of ‘this BIM thing’ could really be realized in this industry, taking into account all of its weaknesses and limitations.

Consequently and purely expressing my own judgment, I think that makes me much more of a BIM-mer of utopian, as opposed to dystopian qualities.

For example, I still believe that ‘paperless construction’ is a viable way to go.
Starting from a smallish, but hermetically controlled (full cycle) construction project and growing it bigger and bigger, it is truly possible to rattle the cage of speculative building practices that thrive globally, given the right people and environments.

I have a fetish for American law dramas, for one reason only.
You do get two sides of any one story, almost no matter what the price of it is, or outcome.
Sure, some may involve weak, court appointed fighters but the fight is still real, two sided, even if uneven.  (I would settle for that in the current BIM arena).

I do everything to make people stop buying into a ‘BIM dogma’.
BIM has long become a dogma? When there is only one way, one solution, one thinking.
The innovation and positive change stooped happening. The truly useful people, left the field.

In summary, me still being here, writing blog-post after blog-post, when I do not feel like writing any more, is not about being positive or negative, dystopian or utopian,

It is to urge people to fight for the ability to, without fear and negative consequences, challenge decisions that cut through the day-to-day life of their work and the future of the industry, that is bloody big. 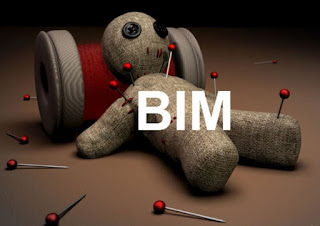