With the birth and rapid rise of Project Managers within the AEC industry, including an almost full takeover of it by them, over the last 2-3 decades, came also the approach of managing Construction projects the ‘hands-off way’.

The technical knowledge of ‘how buildings are put together’, once an essential tool of architects (the predecessors of PMs as the captains of the industry) has become obsolete for the new stars of the show, in fact any practicing PM worth their salt would go to great lengths hiding any such capability. So, no direct relationships were drawn to their architectural backgrounds (if that was where they were infected by such capabilities) jeopardising their metamorphosis into PMs and rise within the ranks. Those PMs that were once engineers of any other sort were also encouraged to forget what they knew about their first disciplines, lest it clouded their ability to manage projects in a ‘detached’, even handed way.

Training institutions worldwide recognised this trend and jumped on it by producing non-technically contaminated PMs by the thousands. The magical title of the PMP was born too and the rest is really history. Construction Project Delivery Meetings are about tasks, percentages, numbers and completeness of drawings, KPI and MOMs.

I guess as a natural development of this ‘new profession’, an even more peculiar flavour of the PM breed has emerged and is stealing the show nowadays, the ones called ‘Project Controllers’. They seem to have the mandate of the almighty with zero tolerance for the un-measurable or subjective components of the game.

As  a hands-on, practicing BIM-mer and the owner of a ‘Virtual Construction Company’, I once had my own ambitions to build a business around the idea of ‘full control of project information’, providing smart management of project information, with up-to date, intelligent reporting on key performance indicators (KPIs!). We went down the road of developing numerous (first in the world)  tools for nifty 3D-4D-5D information management and invested in ‘multi-headed’ people that could manage project information in true, holistic way.
We were unsuccessful, needless to say.

My husband and partner in the business still maintains his views on how the PM fraternity of our then location conspired to push us out of the business, my take on what happened is much simpler and sadder.
The way construction projects are delivered these days all around the world (apart from very small scale buildings) do not favour those that want to – need to - know things well. It is designed for and run by those that ‘can manage things, aggressively, often with procedural perfection’ but with no interest in what is actually being built, how and by whom.
In fact, they are deeply aware, that any such knowledge would prevent them being the ruthless slave-drivers of projects, deadlines and KPIs. A bit like politicians knowing too much about their constituents day-to-day lives would be unable to pull off tough decisions.

The still current, typical relationship between the PMs and BIM-ers of the industry is a very good indicator of the way the power-struggle between knowledge and ignorance, problem solving and problem managing has been settled already.
Having easily beaten the practitioners of ‘traditional disciplines’ (architects, engineers) in the 80s and 90s, some fragments of the BIM promoting fraternity proved a bit more resilient bunch. Maybe partially due to the fact that the truly good BIMmers, that I admit are few and hard to find, but still exist, have often grown out of those disillusioned architects that were unprepared to just hand over their previously held captaincies to technically illiterate PMs.

Or, those that grudgingly joined the ranks of PMs in order to maintain some presence in the industry but refused to ‘just manage’ half-blindly and continued to employ their other, despised by new PM’s, capabilities of technical nature.

In the course of my work I regularly get supplied a real PM mentor to personally lecture me daily on how I should do things the right PMP way – I often visualise theses lecturers as the Fat Controller from Thomas the Tank Engine giving out illogical orders to the good natured Thomas crew.

This was a figure once quite liked by me.
In the past – when I had my own ambitions of becoming the equivalent of such ‘pulling together everything smartly’ figure of Construction Projects using best of tools BIM can offer – I even contemplated making it the mascot of the business that was the vehicle for delivering this dream. (I did not, so no copyright infringements to worry here – but do check a post from 5 years ago: http://debunkthebim.blogspot.ae/2011/06/control-is-bad-word.html);

My feelings about the said Gentleman have changed a bit recently, partially due to an article:
(--- Quote from: The Daily Mail ---PC controller gets steamed up over Thomas 'the Sexist' Tank Engine)

“If you thought the television tales about Thomas the Tank Engine were merely light-hearted fun, think again.
In fact, they portray a world blighted by a 'conservative political ideology' and a rigid class system which stifles self-expression. And they are sexist.
That, at least, is the view of a female academic who took the trouble to analyse 23 episodes of the programme inspired by the books of the Rev W V Awdry.
According to Professor Shauna Wilton, women are under-represented in the stories and what few female characters there are tend to have 'secondary' roles or be bossy.
What's more, she has warned that such negative messages about society subconsciously gleaned from the show might even drive its young fans off the rails in later life.
The learned professor was inspired to carry out her study after watching Thomas videos with her three-year-old daughter. While the child was enthralled, her mother was dismayed.
She was left feeling 'uncomfortable' by the way the colourful steam engines are punished if they show initiative or try to change their rank or role.
Her research also highlights the class divide, with Thomas and his fellow engines including Percy and James at the bottom of the social ladder and the Fat Controller, Sir Topham Hatt, at the top.
Any attempt by the downtrodden workers to show initiative or dissent is met with punishment, she found.
In one episode, for example, Thomas whistles impatiently at a police officer and is replaced with a different engine as a punishment for showing dissent”.

PC aspects of the story aside, this take on the character (especially the underlined part) did make me feel Sir Topham Hatt being much better suited to represent the masses of Project Control Managers that rule this industry then the under-dog BIM-mers I associate myself with.

Maybe he knows nothing about trains after all, and is just managing them anyway. 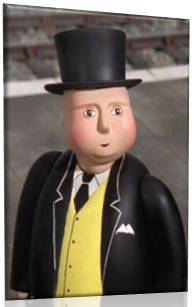