Paper-free Construction – A Catalyzing Epidemic by Design, that will invigorate the stale, global AEC industry

I like to claim to have been working with BIM for over 20 years.
Together with many other BIM enthusiasts, we’ve been trying to fix the AEC industry for decades now, by adding various amounts of BIM magic to it. The results are still pretty dubious. ‘The jury is still out’ on how well BIM has been doing, and even if the proverbial jury was not out – I’m definitely not convinced that it is making a noticeable dent on the performance of the global industry.

There is nothing wrong with the concept of BIM. It is just no longer the solution to the ‘problem’.
Once it may have been, 20 or so years ago – but when the conditions were right, it did not really caught on – and now it is too late. The cost and effort needed to make it work on any level is prohibited for most, within a dippy industry that does not value long-term investments into tools and approaches.
A bit like trying to force the entire financial sector speak fluent Latin in order for the Share market to become more honest, transparent and productive.

It is time to look at our options to rejuvenate this industry in a different way?
Wise people sometimes say, the solution to a problem could as easily be in taking something away as adding-on something else.
An over-salted soup may be made palatable by the additions of herbs, spices or certain vegetables, but reducing the salt in the first place could be an even more elegant solution.

Like, with fixing up an unpalatable soup once it is already spoilt, we’ve been forcing BIM onto the AEC like an unwelcome additive, expensive and feeble, still hoping that it’ll restore the murky stew.

Even though construction projects tend to take longer to create than any average soup, there is still plenty of opportunity in starting anew with an improved, less salty recipe.

Is there something obvious in the industry’s processes that could be taken away without damaging the host and assisting its healing?

The paper, for example?

The concept is simple: Create paperless environments within the industry, enforce them and gradually increase to cover larger and larger areas until they reach a critical cover, of no return.

There are a number of rules for the creation and operation that must be followed for these paper-less environs to function successfully, these I’ll omit in this writ- up, to keep the focus on the knock-on effects, should this approach become the norm.

Unlike with BIM, where the results are mostly measured in what they do to individual projects they’ve been applied to (saved money, saved time, found xxxxx million clashes) – the success of the Paper-free Construction Approach will be measured in the number of people affected by it and what they’ll do once infected.
Since, unlike BIM where even on huge BIM projects (like airports and Malls) most project participants manage to avoid full (or indeed almost any) immersion in the approach and at best become supportive bystanders, in PFCA projects everyone on the project becomes truly paper-free too.

These paper-free thinking and working people, once at peace with the approach will demand and incite developments of meaningful digital tools, in turn raising the ‘coolness factor’ of the industry by a couple of notches.

There will be the symptom called ‘Touched by PFCA’ – applied to those that had delivered a project in a paper-free way, no matter if as a consultant, a construction worker or a client representative.
In contrast to BIM campaigns, where somebody touched by BIM, may talk enthusiastically about their experiences (or not), someone that had survived and thrived in a Paper-free project will pass on the ‘disease’ with a lot of passion.

A newly ‘cool’ industry will attract more paper-free thinking/working people, that will then stimulate its growth even further.

The catalyst of the paper-free environment will in fact sweep over the industry like a ‘good’ epidemic.
Ironically, a new generation of a (more successful) BIM will be the natural progression from a Paper-Free craze. 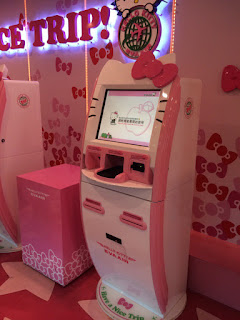 
https://missfoxglove.wordpress.com/2014/08/07/hello-kitty-flight-via-eva-air-from-taiwan/
Posted by Zolna Murray at 4:01 AM