Project Schedulers and BIM Managers: Unite! Could the two sectors make one another stronger while helping the concept of the Paperless Construction?

I have a lot of sympathy for the Scheduling sector within the AEC. On one hand they seem to have it easy, any project nowadays will need a Program Manager by default.
For a ‘Regular’ Engineer to become a ‘Planning Engineer’ they need to be fluent in one of the (for most in the industry) extremely complicated tools like Primavera or the somewhat dumber MS Project.
Relatively small numbers within this industry unusually flushed with ‘super talent’ can be bothered with going beyond anything more complex than the basic tools of Excel, so the numbers of qualified schedulers are limited.
Job security is more or less guaranteed.

On the other hand though – being a Planner (as in the ‘time scheduler’ type) on an AEC project is generally a pretty thankless role to be in. I’ve seen many times through my career these poor souls getting seriously roasted over any/all failures of the project by people that should know better, like project directors and the ones above them.

In fact, having spent a good quarter of a century working in close proximity with Planners, I’ve seen their fortunes shape in very similar ways to those of us practicing the similarly ‘black art’ of BIM.
Apart from the obvious similarities, like the necessity of knowing at least one mystical (un-learnable?) software to operate within either of these sectors, there are many other likenesses between the two sub-species.

Like, expectations.
Others on the projects generally expect ‘unreasonably high’ or ‘ridiculously low’ results from both Planners and BIM-mers. Few understand what exactly are these specialist team members supposed to be doing, in turn their efforts and outputs get either shrugged off as ‘meaningless’ or they are expected to press the magic button on their ‘super-tools’ that will instantaneously save the project from all upcoming dooms, whenever the PD asks or directs.
They are mistrusted and secretly admired, simultaneously hated and worshipped.

Then, there are the officially promoted ‘supposed synergies’, of the ‘D’s type, BIM-mers theoretically are the guardians of all ‘D’s on BIM enabled projects (anything from 3 up) with Schedulers the official custodians of the 4th or 5th D, depending on their pecking order with the QS-s on the team. Since D’s should stick together, for high level strategist in charge of mega projects and companies it usually  ‘makes sense’ for BIM and Planning Departments to work hand-in-hand, in fact for many companies the first step towards doing anything BIMish is to charge their existing Planning Departments with rolling out the BIM implementation. (a big mistake on its own, often preceded by an in-sourcing/outsourcing fiasco  but let’s not digress from the main line of the story).

In practical terms, working closer for the two sectors is not easy.
Being the despised (or often only just tolerated) nerds of AEC projects is not necessarily a strong enough reason to seek out the other for cooperation or even just for company. The two groups, unless forcefully lumped together often are happy to eye the other camp with the same level of ‘no one understands us’ rhetoric they cultivate for the general project staff.

For a meaningful (technical) collaboration a significant effort would be required from both sides, understanding what the others are really about, learning about their tools and finding ways to support the others without hindering the progress of one’s own ‘specie’.
Too much effort needed for likely little gain.

Yet, I do see some opportunities in the future for both of these sectors to truly prosper in forming a stronger alliance with the other.
For a start, collectively they do have the smartest, most ambitious and adventurous part of the industry’s intellectual resource, forging an internal army of thinkers is only a step away.
Individually, they both have battled for decades the negative forces of the industry wanting to remain led by the bullies as opposed to the smart ones.
And managed to survive over a significant timeframe and often against the odds of the immense bully-power.
Admittedly weak, marginalised and hardly taken seriously still they together also own some core values and qualities, that normally take decades to develop and will take decades for those that start from scratch now.

‘Paperless Construction’ is my bet for the ‘idea’ over what these two groups could meaningfully cooperate and simultaneously give the industry a good jolt where it is desperately needed to be kicked in.
Surely, quite a number of stars would need to align favourably for this to happen any time soon especially at any meaningful scale, but who knows – with a little help here and there to nudge those stars to the right positions; there is a chance for real progress for the entire industry.

And for those that still think Paperless Construction is a naïve utopia – let’s just state for the record, it is not. 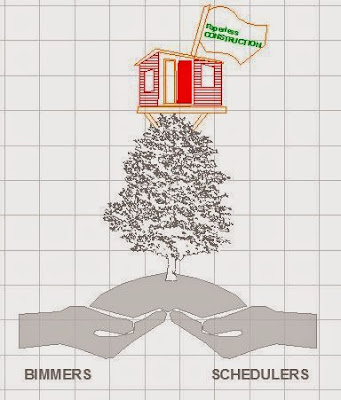