Construction Clients: Who is the conductor of your project orchestra?

Construction Clients: Who is the conductor of your project orchestra?

As a career starting architect, some 30 years ago, I considered Jørn  Utzon as one of my top 5 hero architects to look up to.
Even in the pre-internet era, I searched internationally for related material and read everything I could get to, regarding his life, work and projects.
While how the Sydney Opera House came to life, and to large extent Utzon’s role in it, was then and still is a controversial topic, for me, he is an excellent example of ‘an architect’.
The type of architect, that no longer exist.

Not necessarily because of lack of skills, talent or dedication, exceptional people still ‘architect’ exceptional buildings worldwide, but because the role Utzon played at the time the Sydney Opera House was built, no longer exists.

For better or worse, up to 30 or so years ago, architects were in ‘charge’ of building projects.
Depending on one’s interpretation of the word ‘charge’ it could have been perceived that they poked their noses into every aspect of the building process, its looks, its functional performance, make up and cost.
Or from a different viewpoint, they had the responsibility to take care of all aspect of the building under their care. In fact, more often than not, architects were contractually in charge of the building design and construction.
Not every architect was, of course, of Utzon’s caliber in marrying the design aspects of the building with constructional viabilities and functional requirements while managing the financial and planning aspects of the creation process. The role being a ‘generalist’ type role, it was inevitable that some functions were performed better than others by the architects of the time.

Then, the eighties happened, followed by the nineties and on to the new millennium and the traditional role of the ‘architects’ has disappeared, all together.

Sure, it is a touchy topic, and no party likes to explore it in a rational way. The architects of the old times, that lost their ground by choosing to specialize in ‘design’ yet forfeit construction management and contract admin, are all but gone and the new ones do not seem to know any different.
It is apparent, that the role of the ‘person in charge’ was taken up by the professional project manager they do not like it questioned either.

No more a ‘Jack of all trades’ (and master of none) once reclaimed by project managers, the role of the ‘project architect’ came with a more focused scope of works, management for quality, time and money with special importance on client representation.

Over these 30 years, project management matured into an industry on its own, with a good handle on client and (generally) project management. Architects seem to have also found their peace in the creative design and documenting.
The shift was not seamless.
At the beginning of this transitioning process, to justify their existence project managers used tactics to dirty the names of their architect predecessors often by implying design expertise naturally came with financial/managerial inadequacies. The institutions looking after the retreating architects did not help either, by promoting risk management based on ever diminishing responsibilities within project management for their members.

There is one unacknowledged victim of this fight for project supremacy, and that is the Project Itself and ultimately the client that is shortchanged.

Creating buildings can be looked at as two different processes.
On one side, there is a need/want (brief) around what a set of consultants are engaged to come up with an optimal solution (design) that is to be constructed into a physical something by a group of specialist building-element makers. The process is led and overseen by the project manager.
The above process is not that different to many other PM jobs, like organising an event or shooting a feature film.
What makes construction projects different to many other, is that the Design (the ‘what’ are we making thing) is by no means defined at the outset, in fact rarely if ever fully before the building is completely finished.
This aspect of the process is generally undervalued if not fully disputed, not necessarily due to any malice, more how design development has changed over years.

The variable part of the design process become larger as the industry evolved over the last 3-4 decades.
Buildings became more complex, detailed, comprehensive documenting up front expensive and often redundant due to procurement strategies available. A dynamic and ongoing design management has become the norm.

Back in early 2000s, having lost their contract admin role, for a while, architects still managed to retain their positions of Lead Designers. They were able to perform and get compensated for the tasks of pulling the design together and maintaining its integrity throughout the process, including construction.

This seem no longer to be the case. These days, architects are often just ‘one of the group of consultants’ signed up at design stage, their influence fizzled to nothing once construction starts. Novated arrangements, if in place at all, give them barely enough wiggle room to try maintain the integrity of their design (read: the looks and feel) – ongoing coordination and design development is left to the Contractor.

And this is the stage that the Design loses all the love and care it desperately needs to survive.
Not to survive as the ‘pretty thing’ the architect dreamed up at the outset, but to come together as a functioning product at an optimal cost that the consultants only partially defined and even less coordinated.
Yes, the design is half done at the sign up of the main contractor, even the most ‘traditional’ of design then build contracts.
Sure, ‘designy’ tasks are given to most parties post contract-start, consultants retained to review and approve shop drawings, the main contractor responsible for the commissioning and production of the same through their own subcontractors.
Is this process truly working under (ultimately) the Project Managers’ directions?

It must be, since projects do get finished successfully all the time!
But is it? Or is this neglect to look after the design process costing us time, money, quality, buried somewhere in the cracks of building delivery?

It is time, to take Design Management seriously.
Clients might flinch at the idea of ‘adding another consultant’ to the never-ending list of specialist advisors they already are paying for.
But here, I am not talking about another musician to be added to an already crowded stage.
I am referring to the missing conductor that will have the holistic integrity of the building at heart till the very end.

Not saying it should be the architect, nor that it can’t be the PM.
Not even implying that contractors aren’t doing their bit already.
Just that someone’s got to do it and at the very least construction clients should know who that person is at any one time of the project delivery. 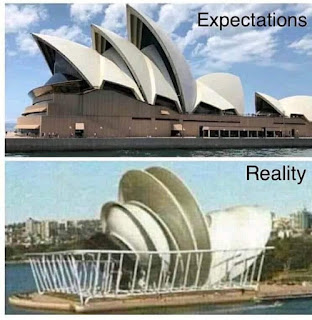 (picture borrowed from the net)