The case for architects with no hands – or why can’t the young of the AEC industry be successful without wanting to hand-sketch?

I am ‘a classically’ trained architect.
Meaning, through the 2+5 years of training to become first an architectural technician, than a Master of Architecture and Construction Sciences (a mouthful, I know) – I had all work done by hand, on paper, sketch and tracing paper, free-hand and/or using drawing instruments, with pencils or pens from design scribbles to full construction documentation.
These were the middle – to late nineteen eighties.

In the early nineteen-nighties, I started to work in real life and in parallel, dabbling with computers.
I got hooked very early on the idea of using the power of computers to assist the profession in design, documentation and construction management.
I was not quite sure then, how that will all happen, but it made a lot of sense to explore it.
Sure, I loved drawing by hand – I still do – but the process of developing designs via sketch paper and getting them documented onto tracing paper required a lot of wasted paper, scratching (with blades) and redrawing time.

Not everyone in the industry shared this enthusiasm for the emerging digital technology.
While the documentation part converted to its electronic equivalent ‘relatively’ painlessly, the idea of designing with no free hand sketching and paper involved, was an absolute no-no for most.
I’ll class the birth and growth of the FlatCAD industry to have been a ‘relatively’ easy and straightforward process for now, though it was not really either, but in comparison to the digitalization of the design process, at least it has achieved some sort of a critical mass in its uptake by now.

True, there has been some progress made into bringing technology into the design processes as well and numerous shining examples exist of digital design processes and outputs ‘happening’ within the industry.
Parametric modeling for difficult shapes and spaces, automated structural and mechanical calculations, environmental impact- traffic flow studies etc.

Yet, even the best examples that move beyond ‘one task based automation’ and into a somewhat holistic approach (like, what is generally classified as BIM) pale against the strongly upheld view that any process that is hand-less, sketch-less, paperless, yet claims to be ‘designing’  is somehow inferior to the old process of designing on the back of an envelope (throw in a smoke-filled bar and mostly men designers for effect too, why not?).

I have been listening for literary 2 decades to theories of, how those, that use ‘computers to design’ never develop the core skills of designing, because they never learn to sketch.
And scarily, this is one of the few statements that both the academia and the leaders of the industry (specially the architectural part of it) tend to agree on.

I tend to strongly disagree.
‘People’ that ‘use computers to design’ are likely to be young – or old but bitten by the techy-bug at a young age (like me);
I admit having observed, that the larger group, the young ones, when first hitting the industry are often truly lacking in many fundamental skills.
In fact, most of their real learning (just like ours had decades ago) comes while working and they will become useful 2-3 years into their career.

But this inability to fully contribute as fresh graduates must not be confused by their ability to learn anything and everything about design without the need to learn to sketch by hand.
Their capacity to carry projects from day one of their employment, design or document buildings successfully has nothing to do with the willingness (or lack of) learning to sketch by hand.
It has a lot to do, with the fact, that those that are charged to teach them the skills of becoming successful AEC professionals are out of synch with their charges’ affinities and force onto them the tools that are alien to them as well as archaic.

It may come across offensive to call a beautiful and quite romantic set of skills ‘archaic’, but I do stand by the statement, as this ‘unspeakable truth’ is highly damaging for the young people and stops them to meaningfully contribute and grow within the industry.

It confuses the software industry too, as they find themselves in the perplexing position of having to serve an industry split harshly across an age line. They tend to recognize who holds the drawstrings of the industry, consequently opt to provide for the oldies, and persist on ‘developing’ outdated products (like most CAD and even BIM software) – not to rock the boat too much.

Yet, the same people that frown on the young shunning the pencil and sketching are very happy to type their letters on word processors.
After all, architecture develops in the head and hand sketching is one tool to help, but just one, of many.
Technology should be encouraged to assist the head, as opposed to stigmatize those that attempt to use it or develop tools for others to use. Empower the abled bodies to get further (even the ones with fine-tuned hand sketching skills) and make the impossible possible for those unable or unwilling to hand-sketch.

I do not wish to exploit the often extraordinary skills, that people with disabilities develop to overcome their lack of extremities (for example) and become successful foot and mouth painters (http://www.mfpa.co.nz/ - do buy their beautiful Christmas cards), but I feel it appropriate to note, that while I do not know of any architects with such disabilities, I see absolutely no reason, while one should not be possible to become one with the help of technological tools.

It is scary to be needing to write these ideas in the current age, but sadly I feel it is still necessary and the urge to stand up (again) for the younger generation within the industry is with me and strong. 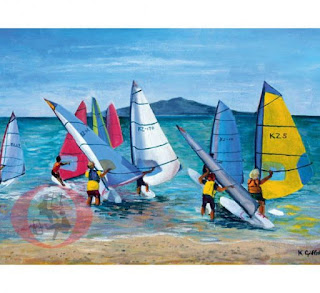