“BIM is struggling in USA” is the title of an article by Mr. Iftikhar A. Gaur. The statement itself s deducted from the end-of-year reporting of the buildingSMART alliance™ USA’s financial performance summary.

Nowadays, I rarely react to such obvious BIM-baits as this, LinkedIn promoted article appeared to be – still, the blatant generalisation the title implied enticed me to read it.
The last two sentences were ‘the cherry on the top’ of the writing, in them Mr. Iftikhar A. Gaur addressed the wider BIM community with a request:
“I am interested in BIM. Can somebody tell me where can I find write resources to learn more about BIM as a manager?”

I have been known to publicly whinge about the somewhat dodgy activities of the global buildingSMART organisation in the past, yet this time, the figures quoted – as fascinating as they were, did not entice me to write yet another useless analysis of the sad state of the Global AEC industry and buildingSMART’s role in getting it there.

More fascinating did I find the phenomenon, that a professional, pretending to be active in the field of BIM, with no fewer than 6 CAPITAL LETTERED acronyms behind his name, is brave enough to make such a statement – as the title quoted, even though he obviously (see end of the article) knows little about the topic.

So, leaving the question of the buildingSMART alliance™ USA’s financial performance in 2014 for another blogpost, I’ve set out to delve a little into the topic of the ‘BIM Minions’.
In the past I called these individuals BIM-Careerists, ambitious professionals active within the global AEC somewhere mid-career taking on BIM with the goal of giving their own job prospects a major kick.

In principle, not a bad thing – the industry, a bit starved of truly smart drivers can do with the positive initiatives of its smartest players. The by now reasonably well experienced, well qualified middle-level workforce is opening its eyes to the BIM ‘potential’. This should be a good sign.

BIM has traditionally been powered by the army of foot-soldiers, ex CAD – often self-trained modellers and the occasional top level smart thinker, but the middle benches have been generally ‘BIM free’ for the last 2 decades.

I attributed the usual apathy of these mostly 30 and 40 somethings towards BIM to a combination of factors. The main one has been, the ability to get-by in Construction without needing to know anything about BIM.
Furthermore, not just ‘able’ but almost actively discouraged to stay away, CAD-ish looking acronyms after one’s name did not generally prove in the past to be a good career booster. (as opposed to a couple of ‘p’s, for example).

The fact, that the likes of Mr. Iftikhar A. Gaur are appearing to be ‘en masse’ setting out to add something BIM-ish to their strings of letters, points to the changing attitude of the previously disinterested layer of mid-level AEC professionals.
More and more often they find themselves put into positions that require them to act knowledgably on the topic of BIM, either by their superiors charging them with BIM-merising parts of the company or their subordinates requesting leadership for upskilling into BIM.

And this is where things start getting scary for the global BIM.
While these would be BIM Minions stayed away from BIM, too busy building their own careers, there was a blissful stage of ‘live and let live’. Sure, they chimed in occasionally, presented at a BIM-related conference or contributed to BIM-flavoured events, but at least they made sure they did not get their hands dirty with anything real BIM. The closest they got to it was in them outsourcing or in-sourcing BIM packages and occasionally pressing the ‘go’ button on a flash animation prepared by others. They were even prepared to admit to their ignorance.

Unfortunately for all, this stage had come to an end.
Even in the sluggishly slow overall BIM progress of the global AEC industry there, are now strong pressures on the top managements of companies to ‘keep up’ and/or better even, lead with BIM initiatives. Various government mandates on BIM processes add weight to this urge to ‘do something’, ending mostly on the shoulders on these ‘at first reluctant’
Minions to ‘Make BIM work’.

A nice little challenge for them, one would think, but unfortunately a disaster-prone one.
These Minions, while having clocked up a decade or two in the industry are at the upwards climbs of their careers are also blatantly ill-equipped to pick up BIM.
They are too old, too comfortable and very often too lazy to learn BIM from scratch; so instead, they try to get-by through bluffing.

Finding themselves on various BIM implementation committees and other subject-forums, asked to make important BIM decisions, they learn to look knowledgeable on the topic. Their managers, themselves only barely literate on ‘high-level’ BIM topics, appear in turn only too eager to let them steer the company across the choppy BIM waters, unchallenged.

And so it goes, the global AEC industry, having started on the back foot with meaningful application of digital tools within its processes some 2 decades ago, carries on the downward spiral of self-deception and pretence.
Rereading the article quoted from the top makes me believe that this charade is only going to get worse in the near future. 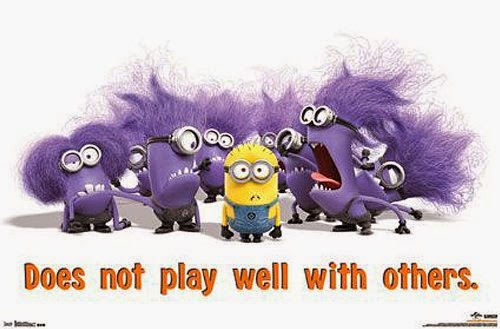 
http://despicableme.wikia.com/wiki/File:Despicable_Me_2_Does_Not_Play_Well_With_Others.jpg
Posted by Zolna Murray at 3:14 AM