Disrupting Evolution and The Tortoise and the Hare

So often was I told to be ‘ahead of my time’ over the last 20 years, I almost got to believe in it myself.
The flattering concept certainly helped me keep on fighting the ‘war’ that did not seem to progress into spitting out clear winners and losers, just ‘second bests’ on both sides.
This idealistic image of a revolutionary fighter must have blinded me to the fact that the other side really could not care less about my theories, especially not while they were set to make as much ‘hay’ as they possibly could, since the sun was shining upon them.

Must have reached a new level of maturity in my life, as I now clearly see that what I was practicing then (and am still now) was not ‘revolutionary’ but a desperate attempt to keep ‘evolution’ on track.

An evolution, that would have helped an industry, mature and well-developed over a long history make good use emerging new tools to become more productive and better performing across the board, had it had the chance.

For a long time the industry had been split into two groups: those that consider themselves to be pro BIM practitioners – a tiny minority, and those that act at best BIM neutral – (read: could not give a toss if it is 2D/4D-25D) – a large majority.

I used to define this phenomenon of the industry tearing up along the line of BIM as ‘it does not pay to do a good job when the industry plays along gambling rules’.
Still, for quite a while I had not quite recognise just what an uneven fight this really was, of pro-evolution BIM-mers against the majority set to disrupt the process and retain the bizarre, non-sustainable status quo that bread shoddy work practices and short term gains.

At the end, curiously enough, it was the ‘other side’ that clarified to me, what was going on.

Suddenly, and almost overnight – many of those non-BIM-believers that managed to repeatedly shrug off everything BIM, without getting penalized in any way, realised that the ‘wind had changed’ blowing some clouds in front of the ‘sun’ that was so generously warming them for such a long time.

Still, they could not just turn around and say – ‘hey, you BIM (VC and the like) guys, you were right all these years’… no, they could not, of course.
They could also not admit to letting an entire industry erode to the levels of (technically) skill-less manipulators and knowingly be party to it turning into a speculators controlled circus.
How could they?

Instead, they had to swiftly find a ‘revolutionary idea’ that would fix all the problems now bubbling up:
A badly performing, sluggish industry.
The no longer easy to hide image of anti-innovation management.
A fragmented and hostile workforce.
A bleak looking balance sheet.
A disinterested young generation and resulting difficulties in finding new supplies of ‘doers’.

Luckily for them, they did not have to look far and long – there it was: BIM!
So cool and innovative, so green and LEED, so OM and FM so IPD and lean!

Sure guys, go for it!
I’ll keep grinding at my slow-evolutionary pace…. 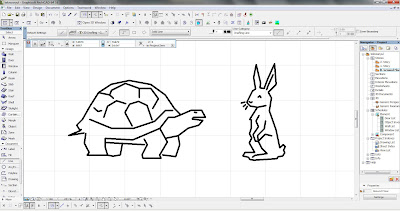