What is the point of this ‘silly little war’ of yours?

Numerous variations of this question had been directed at me over the last couple of days, mostly from people I share the country of origin with, many I have not seen for decades.
Not all of them are negative or belittling, more like voices of reason. After all, many of these people, while of my generation, have themselves been dragged into a ‘real war’, about 2 decades ago – were taken to the other side of the river Danube against their wishes to kill people, burn down entire towns and do other unspeakable things  in the name of someone else’s ideals.
Others of those advising me now, were wise enough to move away from their country of birth rather than be part of such atrocities – and often ended up second-rate citizens for the rest of their lives in some other countries.

So, what IS the point of this ‘silly little war’ of mine? – after all ‘it is only construction’ as one of my well-wishers says.
And not that my message is that clear, they point out regularly too, I’ve attacked just about everyone within the industry, from consultants to contractors, pro BIM-mers and those against it, journalist, the media generally, fellow colleagues, the entire supply chain.
People keep pointing out, that ‘it can’t be possible that everyone is wrong and I’m the only one that is right’ – they say there is ‘no global AEC conspiracy, no evil giant corporations ready to walk over everyone and everything’…’just a bit of a wobbly industry that struggles by doing one-offs all the time’. BIM will fix it. Give it time.
I disagree. Naturally.

Yesterday, in my blog I went for the South China Morning Post, attacking them for not wanting to write about any of the hot-topics I’ve thrown at them in my unbridled rage of getting kicked out by Gammon. The post may have sounded a bit OTT and mean, I still stand by it.
http://gammonandfriends.blogspot.hk/2013/10/the-harshest-lesson-i-learned-in-my.html

One thing, I admit now that I should have added was, that they were not really that unique in their stance, not even in the ‘world of free speech’.

The sad reality is, that ‘we’ have no journalist that can meaningfully investigate construction-related stories. And when I say ‘we’ I mean the world as a global consumer of AEC products and services.
You can read daily about reports of mega projects being late, over the budget, under disputes, below quality, not fit for purpose etc. etc. etc…
But try to put a project director in a questioning chair (and does not even have to be by the media but say, by a concerned shareholder) and I bet my last dollar that the PD will weave the most heart-breaking story around your question – finishing with the crescendo of a conclusion of losing ‘only x billions of dollars’ due to his (far more often than her) great abilities to ‘minimise the damage due to the incredibly unfortunate set of unforeseen circumstances’.
So convincing will he be, that the shareholders will all leave the meeting clutching their handkerchiefs and eternally grateful for this great fellow’s efforts on looking after their investments. Someone will suggest a bonus, a raise, a new position within the company, one-two steps up on the rungs, somewhere even more exotic, say Dubai?

I have been fortunate to get to know the insides of quite a number of mega-multinational AEC companies. I have also been very patient and eager to assist many of those in cleaning up their practices and finding the ‘right way’.

My biggest surprise?  I spent zillions of hours to make it easy to understand.
Time after time, presentation after presentation, step-by-step ‘this is happening to you now and this will end up like this in the future’ – talking to project directors, engineering managers, operation managers, CEOs, CFOs and company owners and every time I get the same thing:
No, it’s not like that, you are mistaken.
Not, tell me more! Let’s go over it again! What makes you think that? Nope.
You are wrong!

Now, if you have never met me in person, you’d think (from my blogs) that I’m always this hysterical, shouting, blaming the world witch-bitch. But, believe it or not, I get into every new job, project, relationship with the idea of making it work. Calm, composed, positive and enthusiastic.
I’m almost always prepared to be argued with, even convinced to be absolutely and totally wrong.
But, this industry has sunk to such low levels that even within the ‘experts’ and ‘specialists’ you come across the biggest of projects that there are, you still get absolute blank stares when you start arguing about any question that combines more than one of technical/contractual/planning or construction methodology topics.

So, knowing this fact of the inside of the industry, one cannot expect the media to be able to meaningfully report, let alone investigate on what is going on.
Those at the very top of the global AEC know this and are still creaming it nicely.

And I will fight this practice as long as I can.
I will fight for transparency and accountability within the global AEC, for consumer rights to know what exactly IS happening on their projects, who is pulling the wool over their eyes and why.
That is my point. Play hard, but play smart. Learn the game, not just the ‘creative story writing’.

You may think I’m alone, a loser fighter, but according to the readership of my blogs, there are plenty of those ‘sitting on the fence’ – waiting for the right time to come. 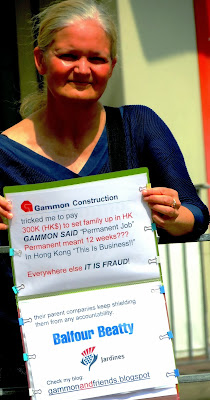