How much does it cost to be a platinum sponsor for the next HK Institute of Building BIM Conference? (ref 1)
I have no idea, but it generally tends to be a nice chunk of money needed to become the major sponsor for such events.
Still, it must be a worthwhile investment for Gammon to have committed to this expense in times of cutting back on overheads (generally);

Warning: There is a proven double-standard when it comes to BIM conferences;
My attitude to them generally is, that they happen far too often and with far too little on offer.
Can’t do real BIM? Do a Conference on one!
I like to say that the industry is totally over-BIM-conferenced…
Occasionally I do volunteer to present at some of these and get really offended when they reject me (see blog-post a couple of days ago);
Then, just to solidify how much a hypocrite I can be, I get all soft and enthusiastic and school-girly prepared for it,  when  BIMES invites me to present the same (rejected) presentation at their upcoming workshop;
http://www.bimengineering.com/events/bim-essentials-workshop-dubai.aspx

BIMES are in Dubai, let’s move back to Hong Kong; (that is, move the story back)
How did Mr Derek So, the self-crowned BIM expert and director of Gammon, justify this platinum sponsor expense to his board ?
Will it get him on the programme as a keynote speaker?
Last time I looked, there was no-one at all from his team presenting;

Or is this gesture meant to take the audience’s attention away from the fact that they have nothing new to show?
As quasi ‘host’ it would be expected of them to stay away from self-promotion and show some restraint about their own achievements? (after having claimed for years to be the best in HK?);

Or, to the contrary, will it buy them the prime spot for Mr Thomas Ho as the CEO and main BIM enthusiast of the Ex-Co to explain just how important BIM is for Gammon and how much effort they are putting into it.
After all, they recruited one of the best BIM consultants (ex Gehry Technologies-ref 6)  in the world to assist them go to the next level – even though, already claimed to be the best in Hong Kong for a while – numerous steps ahead of the Government, for example. (ref 7)
I don’t imagine they will allow for question time if Mr Ho does present, in case someone dares to ask what happened to the world class BIM expert they shipped in and out of HK under mere 4 months?

Negative thoughts aside, Gammon may use this great opportunity to team up with Autodesk and unveil a ‘Ground breaking new way of delivering the undeliverable BIM scope’ of the 11xx MTR line in a month instead of the specified 3 (ref 2-4) that had well passed for most of the contractors anyway?

Or even more spectacularly, show how BIM is assisting the catching up efforts on the major delays of the West Kowloon Terminus. (ref 5)
My guess that this surprise ‘magic’ will be left for the two gentlemen who will be talking on behalf of  InteliBuild, Mr. Jay Zhu, MEP Engineer and Mr. Mark Roberts Senior VDC Project Manager in their presentation: ‘MTR - Express Rail Link West Kowloon Terminus - Big BIM for A Big Stage’.

I any case, I wish them a good event, get the best bang for your money Gammon, you’ll need it! 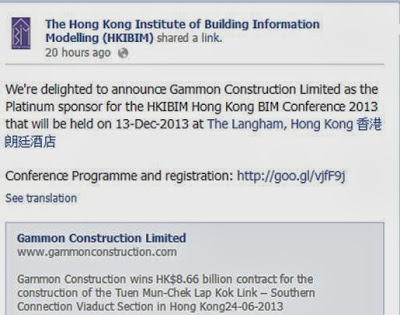